Ministers Dr Sudhakar and Sriramulu pose for the cameras, paint picture of bonhomie 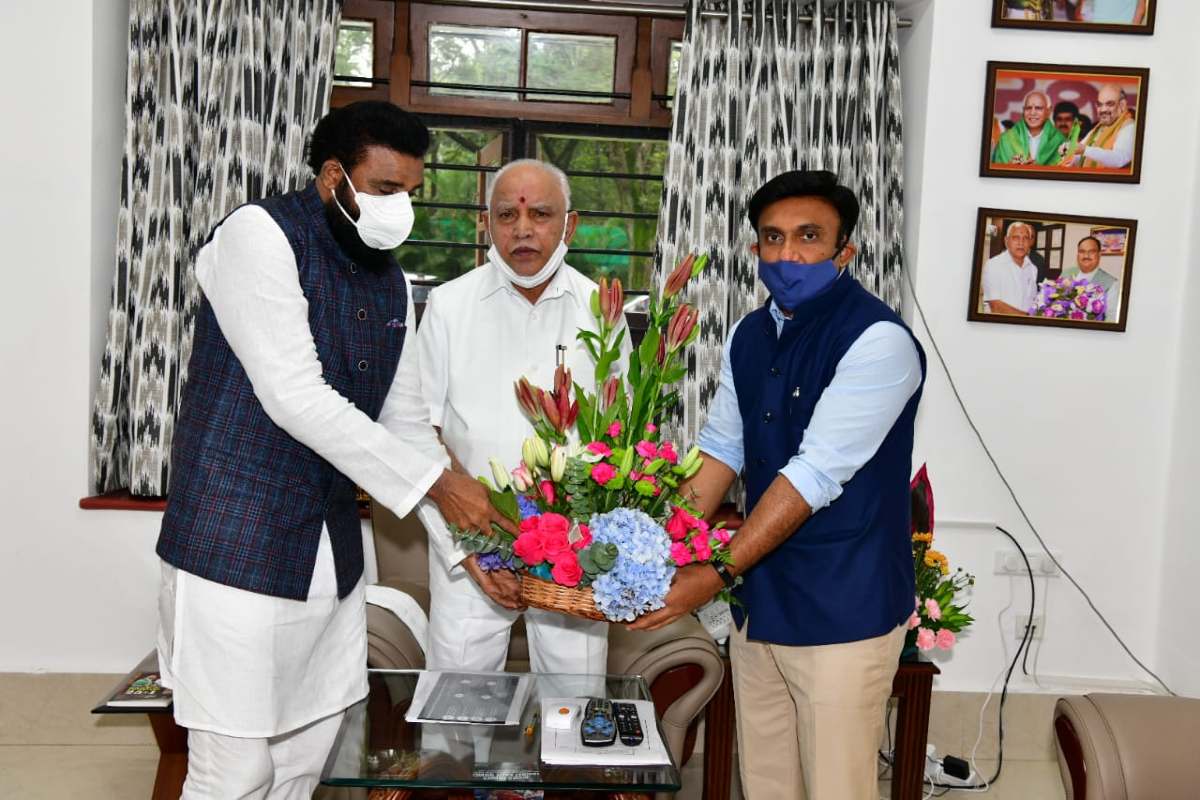 It has become a tough job for BS Yediyurappa to balance all interests and several compromises are being struck.

A day after Karnataka Minister B Sriramulu lost his plum portfolio of Health and Family Welfare Department to fellow minister Dr Sudhakar, the duo on Tuesday put up a picture of apparent bonhomie within the BS Yediyurappa government. This even though sources claimed that an understandably upset Sriramulu had offered to quit from the cabinet in a meeting with the CM on Monday.

Photos and videos shared by the Chief Minister’s office showed both Sudhakar and Sriramulu walking and smiling as they came to meet the CM following the portfolio reallocation.

In Monday’s reshuffle, Sriramulu, a highly influential leader in the Kalyana Karnataka region, who is from the Valmiki community (a scheduled tribe) was given the Social Welfare Ministry and the Health and Backward Classes Welfare Ministry was taken away from him. While the Health portfolio went as an additional charge to Medical Education Minister Dr Sudhakar, Backward Classes Ministry was taken by the CM himself.

Speaking with reporters following the meeting, Sriramulu claimed he was not upset to lose his portfolio and called it a practical decision to let a single person lead the Health and Medical Education Department. Similarly, Dr Sudhakar said that Social Welfare department was a significant portfolio and this reshuffle was in no way a demotion for Sriramulu.

While politically, it may appear that Dr Sudhakar’s gain was at the expense of Sriramulu’s faceloss, political observers said it was evident that it was not Dr Sudhakar but Water Resources Minister Ramesh Jarkiholi who pulled the strings.

As reported by TNM, according to sources, Jarkiholi who has the ambition of becoming the tallest leader within the Valmiki community had his way with the CM to keep Sriramulu in check. It may be recalled that Ramesh is a newbie to the BJP and was with the Congress until 2019. He had led the ‘rebel’ gang of disgruntled MLAs including Dr Sudhakar who resigned from the Congress-JD(S) government and paved the way for BJP rule in the state.

A source close to Dr Sudhakar said, “Today’s photo-op is not surprising at all. The issue has always been about the post and less about personal differences. The change in the Health Department alone is not a shock to anyone as it was in the making for some time.”

How was Sriramulu placated?

“The CM’s hand is already tied with the other rebels seeking a ministerial portfolio for themselves. It is likely that post the bypolls, Sriramulu will be given back the Backward Classes Welfare department or it will be merged with the Social Welfare Department as it was before the Siddaramaiah-era. Moreover, the CM is likely to implement the Justice AS Sadashiva Committee recommendations. And the CM will let Sriramulu announce the same which will further amplify Sriramulu’s political stature,” a source in the CM office said

Justice Sadashiva Commission was setup to examine whether the benefits of the government reservation reached all sub-sects of SC/ST communities equally. The committee was asked to study the situation and suggest how to improve the condition of the people from these communities.

The Sadashiva Commission report had suggested terms of reference on division of SC categorisation of reservation and it also also divided SCs as Left, Right, Touchables and others.