In Sira and RR Nagar bye-polls, its a proxy battle between DKS, R Ashoka and HDK 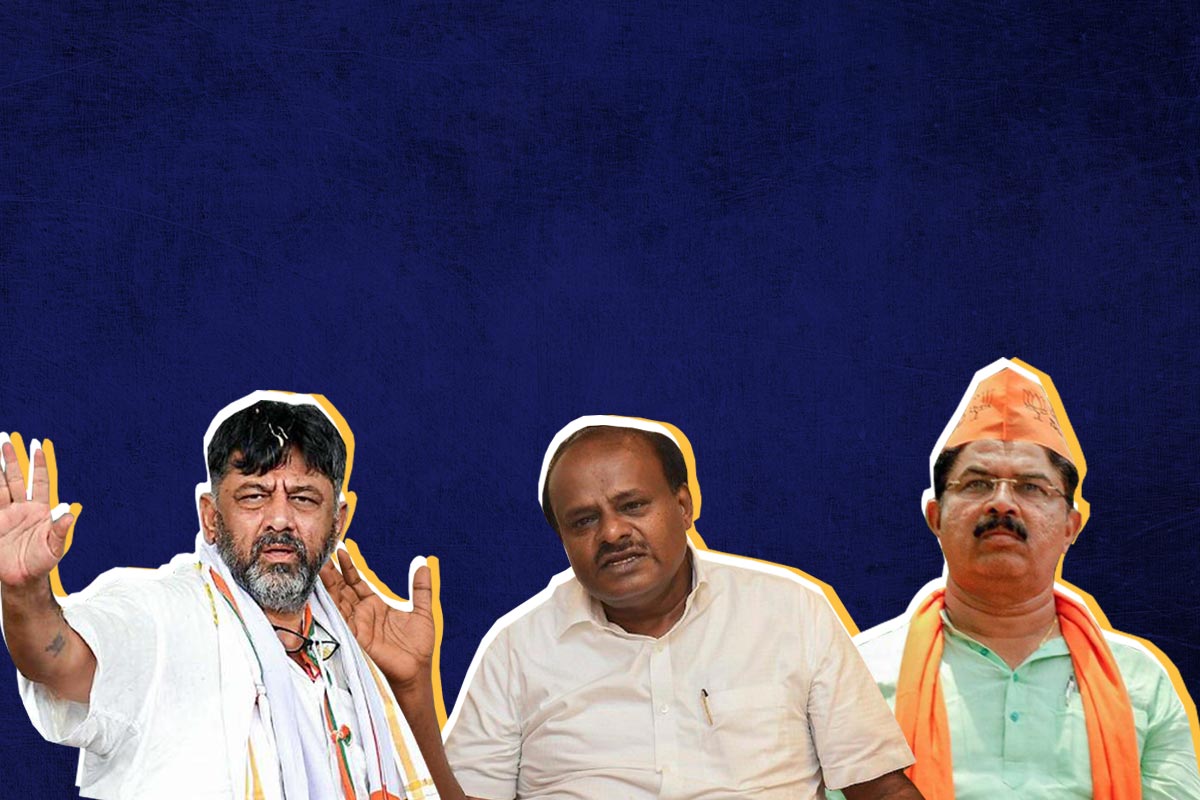 The three Vokkaliga leaders are indulging in a game of one-upmanship to prove their mettle to their respective parties.

The Karnataka Assembly bye-elections are scheduled to take place on November 3 in Bengaluru’s Raja Rajeshwari Nagar (RR Nagar) and Tumakuru’s Sira, have turned into a turf war among three Vokkaliga leaders from the Congress, BJP and JD(S), to prove their mettle, while the candidates themselves have taken a back seat.

The poll war in RR Nagar is between Karnataka Revenue Minister R Ashoka and  the DK brothers — Karnataka Pradesh Congress Committee President  DK Shivakumar and his brother, Bengaluru Rural Congress MP DK Suresh. In Sira, Shivakumar its a proxy pll battle between DK Shivakumar and former Chief Minister HD Kumaraswamy. One of the most prominent Vokkaliga leaders in Karnataka, Kumaraswamy has gone hammer and tongs against   Shivakumar following speculations  that the JD(S) Vokkaliga MLAs are trying to bond with the Congress.

In both constituencies, the Vokkaligas are the dominant  community, notwithstanding the fact that the contest is between the leaders, who are driving the poll campaign. The political stakes are high for the BJP and Congress in RR Nagar, an urban segment where the BJP will have to seek votes for its candidate Muniratna Naidu, who defected from the Congress to the BJP in 2019. Munirathna is also the candidate, who the BJP had heavily criticised for alleged electoral malpractices during the 2018 Assembly elections.

The poll battle in RR Nagar

Polling in RR Nagar had to be deferred in 2018 and was held later following the seizure of  9,567 photo voter identity cards in an apartment in Jalahalli. The former BJP candidate for the RR Nagar segment, Munraju Gowda, had filed a complaint and an FIR was registered against   Muniratna too.  In the rescheduled poll, Muniratna won by a margin of 41,162 votes, which the BJP  candidate Tulasi Muniraju Gowda had contested. The rivalry between the two grew exponentially, after Muniratna joined the BJP. Muniraju Gowda had filed a petition in the Karnataka High Court and the Supreme court challenging Muniratna’s victory, which was dismissed by the SC on Tuesday, paving the way for Munirathna to bag the ticket for the bye-polls.

“It is Shivakumar and Suresh (RR Nagar is an assembly segment of Bengaluru  Rural constituency) versus me in  RR Nagar.  I have deployed an army of  five ministers, six MLAs, 80 former BBMP (Bruhat Bengaluru Mahanagara Palike) corporators and 750 party workers in the constituency. I was an MLA  thrice from RR Nagar (when it was a part of Uttarahalli constituency before the delimitations of constituencies in 2008) and I know the technique of winning from here. This is a question of prestige and  challenge to me,” Ashoka, who is in charge of  RR Nagar told  TNM.

Former  Home Minister and senior Congress  MLA  from BTM Layout Ramalinga Reddy, who has been tasked with handling the campaign for the RR Nagar’s segment, said that the contest would be not about rivalry but about issues that the Congress is highlighting, especially the lapses in managing COVID-19 by the Union government and the state government.

“There are 20% of voters who are neutral and if they decide to vote on issues, then they can bring about a change,” he added.

Candidates and their fortunes

In RR Nagar the Congress has fielded a new face, 31-year-old H Kusuma Ravi, wife of late bureaucrat DK Ravi. Before announcing a candidature, Shivakumar had indicated that it would be a “surprise” nominee. The BJP’s delay in announcing the  candidature of Muniratna was due to the case filed against him by Muniraju Gowda. “Muniraju Gowda can spoil the chances for  Muniratna as their political rivalry continues even now,” BJP sources said.

The BJP had won the RR nagar segment in 2008 and in the subsequent elections held in 2013 and 2018, Muniratna Naidu won the polls. Congress sources said that despite his turncoat politics, Muniratna holds sway over the constituency. “Many former corporators and Congress  party cadres went with Muniratna when he defected. Being an urban constituency, the caste   factor does not matter as  Muniratna is from the OBC community, while our candidate is a Vokkaliga,” Congress sources maintained.

The JD(S) has given the ticket to former corporator V Krishnamurthy, who holds several properties in the city and is a resident of Jnana Bharati. The party fielded GH Ramachandra, a Vokkaliga in 2018, who bagged the third place.

Even as it’s a show of strength between Shivakumar and Ashoka in RR Nagar. However, the fact that Muniratna has nurtured the constituency in his individual capacity cannot be discounted. Poll observers claim that in the event of a victory for the BJP here, the credit should  go to Muniratna, who in his erstwhile party — the Congress — had  curbed the growth of BJP in the constituency.

Of the total 4.60 lakh voters, Vokkaligas comprise 80,000, minorities comprise 35,000, Lingayats 25,000 and the Dalit, Adivasi and OBC votes make up the rest. Even as Ramalinga Reddy and former minister Krishna Byregowda are doing their best for the Congress to retain the seat, the onus is on Shivakumar’s electoral management skills and a challenge to show for his new post as the KPCC President. To match the BJP’s strength, the Congress has  appointed   leaders  booth-wise to woo voters.

he Congress had a head start by announcing former minister TB Jayachandra as the candidate, who has had long innings in the constituency. Sira  has been represented  either  by  the Congress or the JD(S) all these years with the BJP  being unable to make any inroads. In 2018 the seat was won by the late JD(S) leaders B Sathyanarayana. His death due to COVID-19 necessitated the bye-poll.

Being  a rural constituency where caste matters, all the three candidates are from the Kunchitiga Vokkaliga community, a sub-sect, whose people reside primarily in Tumakuru and Chitradurga districts.  Even as the Congress or JD(S) candidate is expected to win, the BJP is hoping for a swing like the bye-poll in KR Pete, where JD(S) turncoat Narayanagowda had won from the BJP, resulting in the party opening its electoral account in Mandya.

The Congress charged former Deputy CM Dr G Parameshwara and former party MLA  KN Rajanna to oversee the Sira bye-elections.  The rivalry between Jayachandra and Rajanna  resulted Jayachardra’s defeat in the 2018 polls as both leaders sabotaged each other. To drive home this point, Shivakumar at  a meeting held to chalk out the poll strategy for Sira and RR Nagar, told the gathering that Jayachandra’s candidature was finalised with Rajanna’s consent.

Parameshwara  told TNM  that  Jayachandra is more experienced  than the two other candidates contesting the bye-polls in Sira. “We will win no matter what the BJP does as we are in an advantageous position,” he maintained.

The Congress is expecting a turnaround of the votes from the Madiga community, who are believed to have voted for the BJP in the 2018 Assembly elections and the 2019 Lok Sabha polls.  “They were hoping the BJP would implement the AJ Sadashiva Commission report  submitted in 2012 which recommended  sub dividing the 15% reservation for the Scheduled Castes. But nothing has been done so far,”  sources said.

In 2013, a committee headed by Justice AJ Sadashiva submitted a report to the Karnataka government after it was asked to probe whether the benefits of reservations were disbursed equitably among all subsects in the Dalit community. The committee had suggested that the Dalit community be divided into four and that an internal reservation must be implemented to ensure that benefits rech these sub-sects based on the population.

Of the total 2.15 lakh voters in Sira, the Dalit and Adivasi communities stand second followed by the Golla community, the minorities and the Yadavas and Kurubas. Unlike the Assembly bye-elections held in December 2019, where  it was a question of  Yediyurappa having to prove his mettle and retain power, the two bye-polls to be held on November 3, are not  going to impact him directly. However, it will alter the political  standing of the three Vokkaliga leaders  fighting out the proxy poll battle.