In Bengaluru, a mural dedicated to COVID warriors, painted by trans women 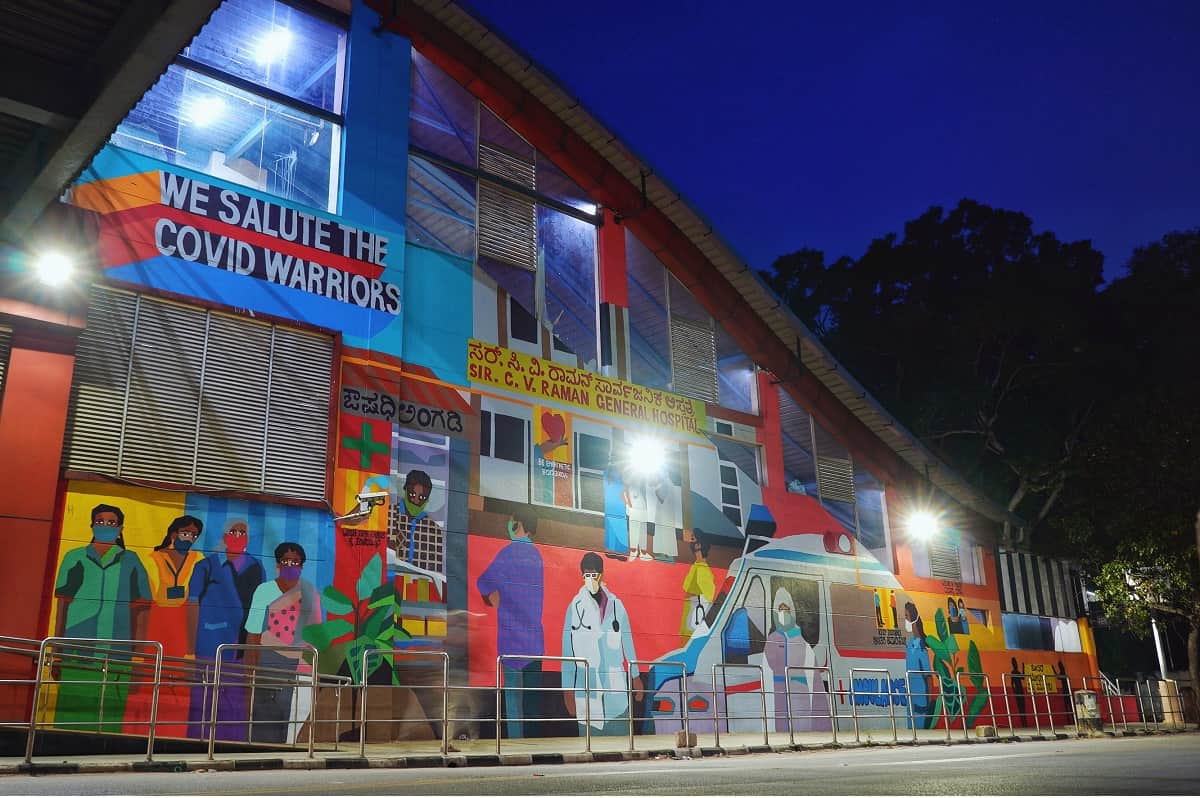 The wall along Swami Vivekananda metro station has been turned into a vibrant mural celebrating frontline workers including pourakarmikas, doctors, police officials, among others.

If you head to Swami Vivekananda metro station in Bengaluru, you can’t miss a wall painted in a swathe of vibrant colours. Look closer and you’ll find a variety of characters on this mural – nurses, doctors, delivery personnel, police officials, ambulance drivers, pourakarmikas, auto drivers. All of them wear a mask, and all of them are at work – much like the reality of our times. While many of us have the privilege of sitting in the safety of our homes, frontline workers don’t have this option. And this mural, painted by trans women associated with the Aravani Project under an initiative by radio station 95 Mirchi, is a testament to their services.

Conceptualised by the team at 95 Mirchi, ‘Lions of COVID’ is a way of saying thanks to frontline workers, said RJ Jimmy. “LoC stands for Line of Control, and the frontline workers are the line of control between us and the COVID-19 pandemic… hence we turned LoC to stand for Lions of COVID,” he says. 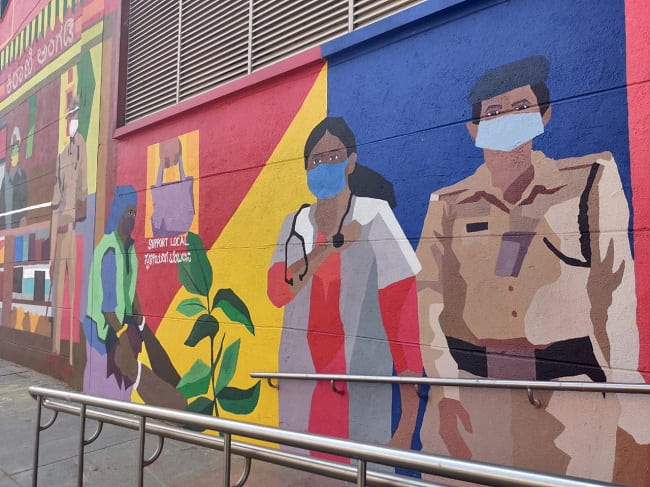 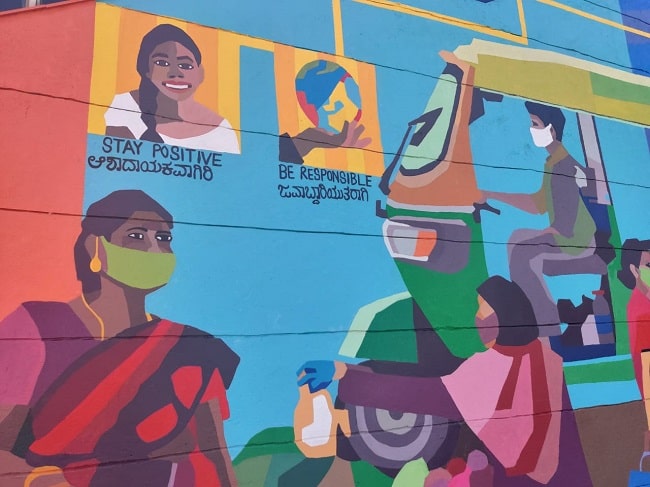 The mural was painted by 10 trans women associated with the Aravani Art Project, an art collective of women and trans women which involves the public and wall art to raise awareness and friendship between trans women and public spaces as well as create safe spaces for alternative voices, per its website.

Speaking at the inauguration, the guests of honour thanked the frontline workers for their contribution and for the mural being made acknowledging the same. The artists who painted the mural were also present on the spot, and received appreciation and applause from the attendees for their work.

One of the artists, Chandri, recounts that they painted the mural in the last two weeks. “We used to come at 10 am and leave at 3 pm,” she says. The pandemic has been a difficult time for the transgender community, with livelihoods severely impacted and access to medicine and healthcare getting cut off. The help from the government has been inadequate. In such a scenario, Chandri says that they have had some income by making canvas paintings through Aravani on order, and adds that they have started getting projects such as the Lions of COVID mural. 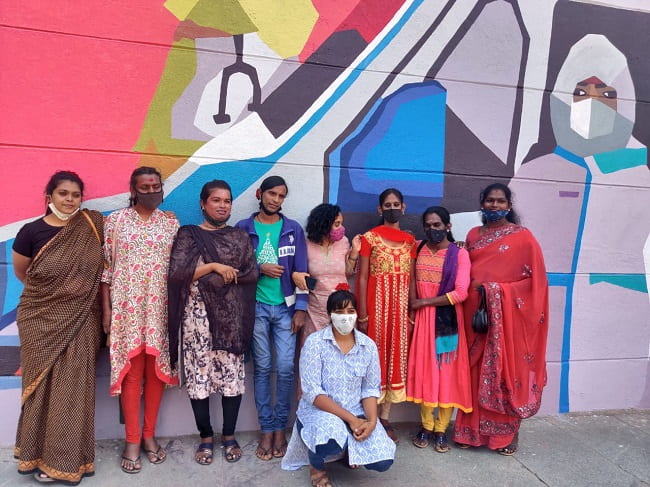 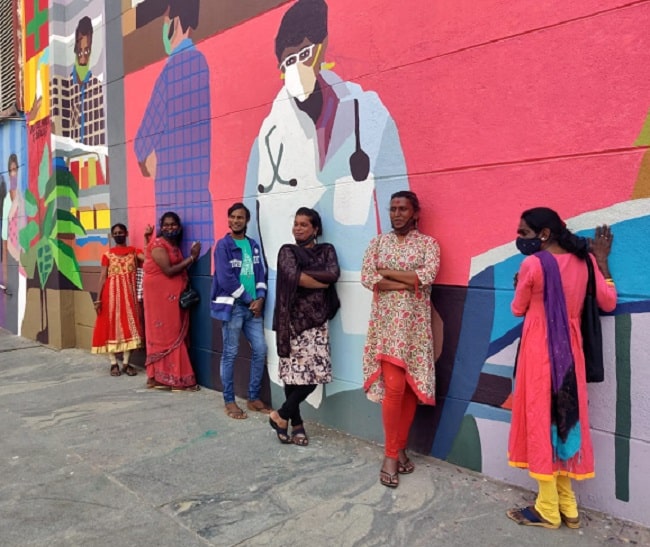 Purnima Sukumar, founder of the Aravani Project, says that the 23 trans women associated with the initiative across India have been fortunate in that sense, wherein they have found patrons to buy their art that is put up on Instagram, and have also started getting public art projects. It has been tough, however, to get trans women involved with art. “We have to be persistent, show them that this isn’t a transactional relationship, and that we are there for them even otherwise. We have to build a friendship and gain, and regain their trust,” Purnima says.

However, for those who have become involved with Aravani, it has been a good experience. Chandri says that three years ago, she couldn’t even imagine painting. “But Purnima and others in the team told me, just try. And here I am… This is the second project I have worked on here, the first was on Kasturba Road. We’ve also created public art in Delhi, Mumbai, Chennai, I even went to Facebook headquarters to paint there in 2018. If, like in this case, the BBMP and the government give us more opportunity, we will create art in even more spaces.” 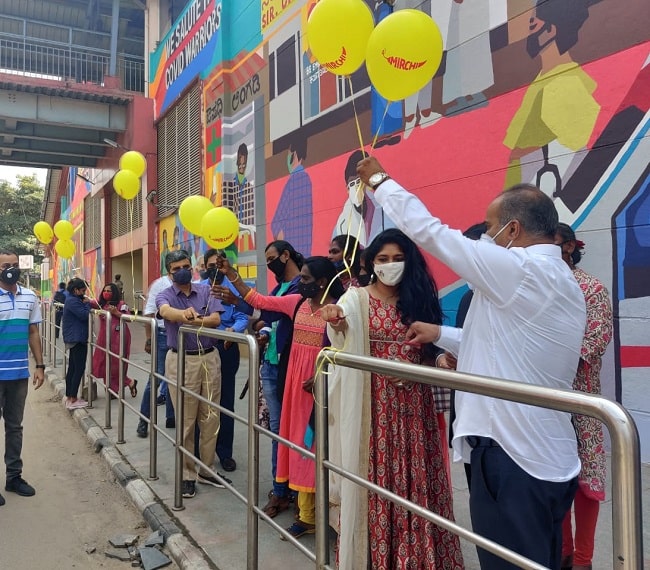 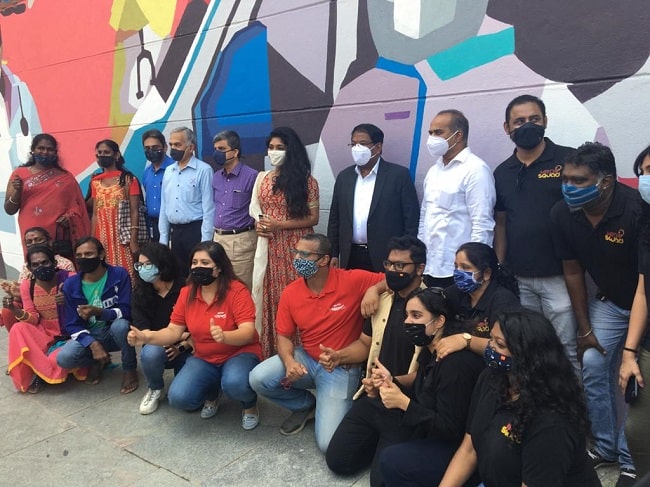 Meanwhile, speaking about the coronavirus situation in Bengaluru, BBMP Commissioner Manjunath Prasad says that the city has been reporting a high number of cases per day because of a higher number of tests being done. “We may reach three lakh total cases soon in Bengaluru, but that’s also because we are testing more, so that we can isolate and treat those infected sooner. We have done 22 lakh tests till now. The positivity rate in the city is 13% right now, we aim to bring it down to 5%.”

“The fight against the pandemic has a long way to go,” says Bengaluru police commissioner Kamal Pant. “I am thankful to 95 Mirchi for recognising our COVID warriors and their contributions in this battle.”

Heading to Bengaluru airport? You can now book your seat on BMTC bus

Bengaluru airport halt station to get its first train next week