BENGALURU:  The BJP wants to repeat its last year’s KR Pete bypoll victory in Sira, but with a different strategy. This time, it is focusing on micro-managing the caste equation to woo voters from smaller castes.The constituency has around 2.1 lakh voters, with Kunchatiga Vokkaliga community constituting the biggest share of over 50,000 votes. With the candidates from all the three major political parties, BJP’s Dr Rajesh Gowda, Congress’ T B Jayachandra and JDS’ Ammajamma, belonging to the same community, there will definitely be a split in this vote block.

The constituency has always picked either a JDS or a Congress candidate. This is the first time that the saffron party is in serious contention. In the 2018 Assembly polls, JDS candidate B Sathyanarayana got over 74,000 votes, Congress candidate T B Jayachandra 63,000 and BJP’s S R Gowda only 17,000 votes. Even in the 2013 polls, Congress and JDS candidates secured 74,000 and 60,000 respectively, while the BJP managed just 19,000.

This time, however, it is a matter of prestige for the BJP. Even before the polls were announced, the government notified the Kadu Golla Development Board, clearly aimed at wooing the community that has over 25,000 votes in Sira. Senior BJP leader and MLC Ravikumar said, “Not all BP leaders and legislators are invited for canvassing. We’re doing cluster-based campaigning where a leader from a particular community, which has a large presence in the constituency, is called in to attract that set of voters.”

The constituency also has around 17,000 Kuruba and 16,000 Valmiki Nayaka votes and that was the reason ministers K S Eshwarappa and B Sriramulu from these two communities campaigned here. “We are not calling in Lingayat leaders as the voter number is small,” said another party leader. 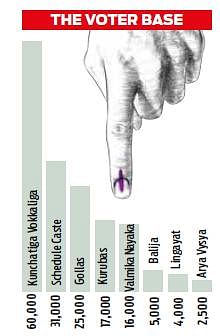 JDS candidate Ammajamma, who lost her husband and sitting MLA B Sathyanarayana, and Congress’ T B Jayachandra, who was defeated in the last election, are depending on sympathy votes, while BJP is targeting around 55,000 votes in addition to its traditional 17,000-18,000 votes to win the poll.

“We hope to get a good share of votes from the Kunchatiga Vokkaliga community. If we can also manage Golla, Kuruba, Nayaka and other minor communities, we can win or at least give a good fight. We have never won here. If we win, it will be a repeat of remarkable KR Pete victory,” the leader said.

State cabinet meets today
Bengaluru: The state cabinet will hold its 19th meeting on Thursday. This will be the second meeting after the  by-elections were declared, the previous one was held on October 1. There won’t be any briefing like the last time when there was no briefing after the meeting. While the last time, 11 cabinet ministers did not attend the meeting and it had one of the poorest attendance, this time too, a few of them are indisposed and are expected to skip the meeting on Thursday.