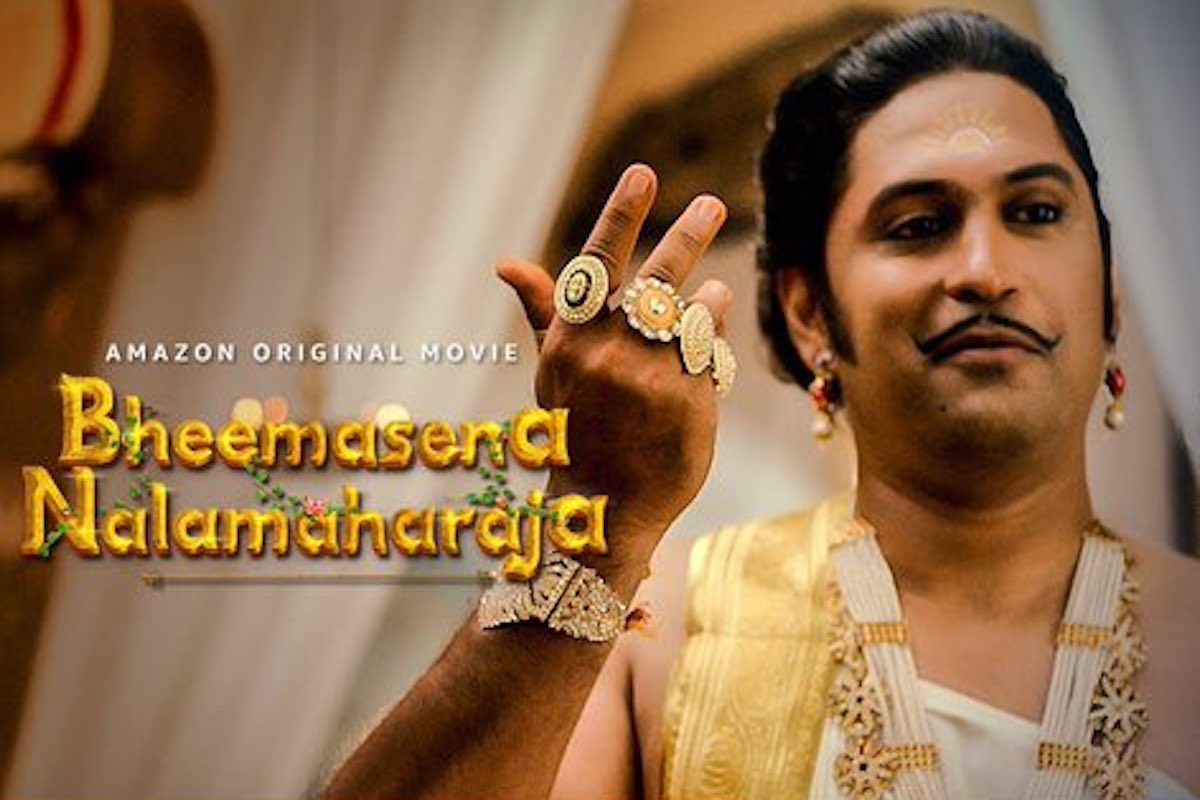 The slow pace and the adult Vedavalli’s shrill characterisation make it difficult to stay invested, even though Aravinnd Iyer does his best with what he’s given.

Karthik Saragur’s Bheemasena Nalamaharaja is about a chef and his troubled marriage with his wife who has had a traumatic childhood. The title refers to two famous male cooks from mythology; Nala, who is said to have written the first ever book on cookery, and Bheema who disguised himself as a cook when the Pandavas went into exile.

In the Kannada film, now streaming on Amazon Prime Video, the hero Latthesh (Aravinnd Iyer) is no prince. He’s an orphan with no riches to his name. But he shares his love for cooking with the heroes from the Mahabharata. We have indulgent shots of him ‘heroically’ approaching a fish, in the same fashion as Bheema killing Duryodhana. He also appears to enjoy cross-dressing, like Bheema did when he killed Kichaka, but this angle isn’t really explored further.

The story unfolds as Latthesh, who works in a resort, speaks to a curious guest, Sarah (Priyanka Thimmesh). While this is a common storytelling device, coupled with the elaborate voice-overs, it gives the feeling of the entire film being literally narrated; it makes the viewer lose their sense of urgency and watch the film passively.

Arohi Narayan plays Vedavalli, a disturbed and difficult young woman, and though we get that the character acts unpredictably because of her troubled childhood, the tantrums border on cutesy Manic Pixie behaviour. I wish Karthik had spent more time taking us through the trajectory of the relationship between Latthesh and Vedavalli. Between the two, Latthesh is gentler, more nurturing and diffident than Vedavalli. But though the characterisation is a departure from the average hero-heroine film, the relationship pretty much follows the template. They meet, they fall in love, and before you know it, they’re married and she gets pregnant.

The conflicts thrown into the script are too convenient and commonplace, diluting the material. Quite like pouring a litre of water into what could have been a flavourful curry. Chitrali Tejpal who plays little Vedavalli, though, is impressive. As an obese child who loves her food and fights back her tyrant father (Achyut Kumar, who gets a shockingly kind treatment in the script, considering the gravity of his actions), she looks every bit convincing, whether she’s eyeing the benne on her dosa or chewing at a chicken bone furiously. It is an over-the-top role but she pulls it off.

The narrative goes back and forth in time, revealing bits and pieces of the story. However, the slow pace and the adult Vedavalli’s shrill characterisation make it difficult to stay invested, even though Aravinnd does his best with what he’s given. The melodramatic solution to a psychiatric issue reminded me of the Malayalam film Manichitrathazhu, which was released in 1993. While such a ruse worked brilliantly back then, it seems strange and unrealistic in a 2020 release.

The promos promised that Bheemasena Nalamaharaja would offer the viewer a taste of six rasas. But sadly, the end result is rather bland.

Disclaimer: This review was not paid for or commissioned by anyone associated with the series/film. TNM Editorial is independent of any business relationship the organisation may have with producers or any other members of its cast or crew.