BENGALURU:  Don’t be surprised if your favourite samosa or aloo bonda becomes costlier. This is because, the humble potato, the second most essential item in any kitchen after onion, has become dearer. In fact, potato prices are at the highest compared to the last few years.

In most parts of Karnataka, the price of potato ranges between Rs 55 per kg and Rs 65, when compared to Rs 30-Rs 40 in the wholesale yard. Traders from the yards and officials in Hopcoms say that it is the first time in the last two years that the price of potatoes has gone beyond Rs 50.

Last year, the prices in the retail market hovered around Rs 45- 50, and in the yards, it was within Rs 30.
While farmers blame the poor yield, traders attribute it to poor transportation and poor quality.  However, managing the kitchen budget for homemakers has become a challenge.

According to the Horticultural Producers’ Co-operative Marketing and Processing Society Ltd (Hopcoms), the price of potato per kg is between Rs 55 and Rs 60, depending on the quality and size, while the price of carrot is around Rs 100 per kg in Bengaluru. In Mysuru too, potatoes are being sold at Rs 50 per kg ever since the pandemic-induced lockdown was imposed.

Traders in most parts of Karnataka said that the supply of potatoes from Andhra Pradesh, Maharashtra and north India has fallen due to lockdown and the subsequent rains. Hassan, which is known as the potato belt of the state, has been badly hit by the heavy rain and poor production, they said. 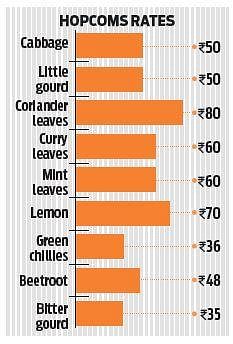 Uday Shankar, Secretary, Onion and Potato Traders Association, said the produce from Kolar, Chintamani, Hoskote, Chikkaballapur, Bangarpet and surrounding areas has been delayed. In the meantime, the consumption of potatoes in north Indian states has gone up, affecting supply to Karnataka. Unlike onion, where standing crops were destroyed, this year, the rain has delayed sowing of potato, which means that harvesting will also be delayed.

Traders in Mangaluru said that since wholesale prices have gone up (Rs 32 to Rs 38 per kg), retail prices, in turn, have been affected (Rs 38-40). Anil, a vegetable dealer, said Mangaluru gets two to three truckloads of potato every day from Hassan and prices have increased due to the festive season. In Belagavi, traders blamed the dwindling arrivals at the yard for the price rise.

Last week, while 3,000 quintals arrived, while this week, it was 2,750 quintals, which were auctioned between Rs 2,500 and Rs 4,000 per quintal, slightly higher than last week. They said that local potatoes grown in red soil fetched the highest price of Rs 4,000 per quintal. According to Hubballi traders, there is not much difference in price in the wholesale market.

The price ranged between Rs 1,200 and Rs 3,600 per quintal, depending on size and quality. And a jump of Rs 10 has been seen in the retail market, where potato is now sold at Rs 50 per kg. “The prices of all vegetables have gone up by 20 per cent, but people are feeling the pinch because the quality offered is not of superior grade. Each time it rains for four-five days, the quality of vegetables is hit and prices rise.

But, in the case of potatoes, the prices have gone up slightly because the stock coming in from Jalandhar is less and the season in Karnataka is over,” said Hopcoms Managing Director B S Prasad. He said that last week, potato was sold between Rs 40 and Rs 42 per kg. “Potato is sown twice a year, first during May and then during October, and the crop has not yet been harvested. This year, the crop has been poor in Karnataka and the rain added to the woes. There is not sufficient stock in storage, thus there has been a slight rise in price,” he explained.