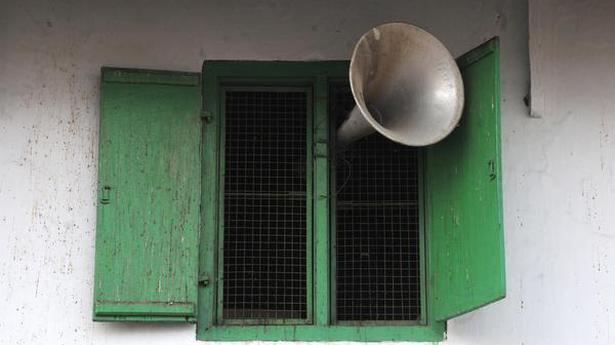 A letter from the office of the Director-General and Inspector-General of Police (DG&IGP) calling for “suitable action” on a petition that seeks removal of loudspeakers from mosques in the State created a stir in the community, especially as it comes in the wake of rhetoric on a law against “love jihad” and reintroduction of the Anti-Cow Slaughter Bill.

Advocate Harsha Muthalik petitioned the DG&IGP on September 30 seeking the removal of loudspeakers from mosques citing disturbance to residents as well judgements in multiple cases in high courts across the country.

The office of the DG&IGP forwarded the petition with a cover letter for “suitable action” to all district police units in Karnataka on November 2.

However, when contacted, DG&IGP Praveen Sood sought to downplay the issue. “My office has forwarded the petition for suitable action to all concerned authorities like any other petition. It is not a circular and I have not signed the letter as well,” he told The Hindu.

Members of the minority community fear the letter will be used by right-wing organisations to build pressure on the local police to ban the use of loudspeakers in the mosques.

Moulana Maqsood Imran Rashadi, a prominent member of the Karnataka Moon Committee, said the noise levels could be regulated in coordination with residents of the area, the police, and the mosque committee. “We neither want to trouble anyone nor violate any rules,” he said.

However, Tanveer Ahmed, a prominent member of the community in the city, said rules should be applied uniformly to all communities. He batted for decentralised regulation of decibel levels for the sound allowed during azaan.

A former bureaucrat from the community pointed out that the Noise Pollution (Regulation and Control) Rules, 2000, stipulates that loudspeakers/public address systems cannot be used unless with a written permission. “Neither any mosque in the State, nor any other religious place of worship have the practice of availing this licence,” he said.

Moulana Rashadi said if they apply for permits, the only contention would be the early morning azaan at 5 a.m., as norms bar use of loudspeakers before 6 a.m.

Meanwhile, another senior member of the community said: “Most smaller mosques use sound boxes, which have a lower range, commonly used in auditoriums and educational institutes. They do not need any permission for that. While the authorities should have no problem with that, all mosques must preferably adapt to this mode”.