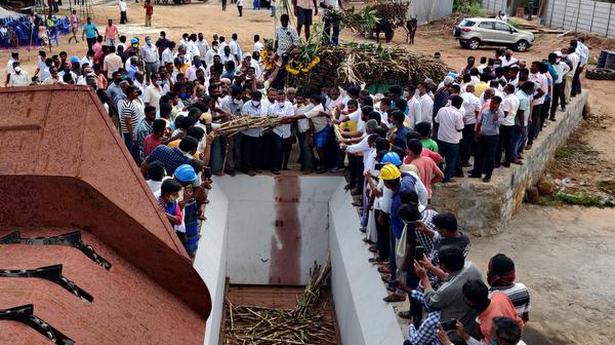 The Chamundeshwari Sugar Factory at Srinivasapura in Channarayapatna taluk started crushing sugarcane on Friday. The factory had stopped its operation for the last four-and-a-half years for expansion.

Shravanabelgola MLA C.N. Balakrishna and farmers had gathered at the factory to mark the occasion. They dumped the sugarcane bundles at the place meant for crushing in the factory. Sugarcane growers of the district had staged protests demanding the restart of the factory.

Mr. Balakrishna, speaking on the occasion, said the crushing of sugarcane had been stopped as the private operator wanted time to expand the capacity of the machinery. Due to demonetisation and COVID-19 pandemic, the relaunch of the factory was delayed. Meanwhile, a dust catcher also collapsed further delaying the expansion efforts.