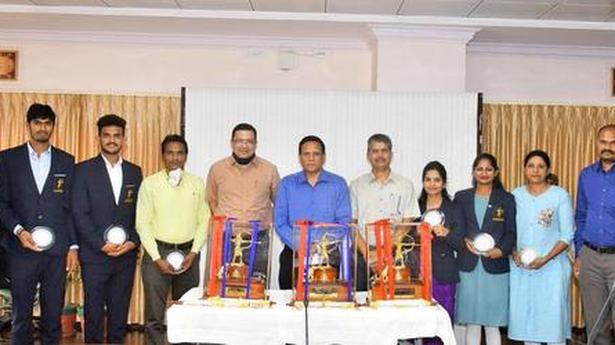 Congratulating the award winners for their accomplishments, Mr. Singh hoped that they would achieve further excellence in their respective sports events and bring laurels to the country and the Indian Railways. SWRSA president S.S. Katware and others were present.

Bhandavya H.M.(Basketball), who joined South Western Railway in 2016, represented India in the 18th Asian Games at Jakarta, Indonesia, in 2018 and the Commonwealth Games in Australia, also in 2018.

Megha Gugard (Cycling), who joined the Railways in 2017, represented India in the Track Asian Cycling Championship of 2017. She won a silver medal at the Track Cycling Asia Cup in 2017.

Raju Bati (Cycling), who joined the Railways in 2018, represented India in the 18th Asian Games at Jakarta, Indonesia, in 2018 and in the 38th Asian Track Cycling Championship in Malaysia in 2018.