All districts except Bengaluru Rural see decline in active cases in Oct. 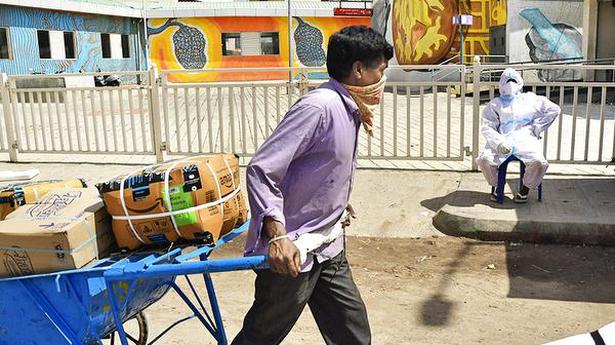 Active cases in the State have seen a negative growth in all districts except in Bengaluru Rural where there has been an increase of over 65% in October. In the 28-day period from October 3 to October 31, while 29 districts saw a negative Moving Growth Rate (MGR), this rate has shot up by 65% in Bengaluru Rural. The number of active cases here has gone up from 1,990 on October 3 to 3,279 on October 31. It fell to 3,258 on Friday.

In Bengaluru Urban, active cases dropped from 53,292 on October 3 to 34,459 on October 31, which is a decline by 35%. Haveri, Chickballapura, Bagalkot, Koppal and Chamarajanagar have seen a decline by above 80% during this period.

Attributing the increase in Bengaluru Rural’s active cases to aggressive testing in the district, Bengaluru Rural Deputy Commissioner P.N. Ravindra said the number of new cases detected were high since the first week of October due to higher testing.

“As it takes at least 14 days for a patient to recover, the active cases number will be high for another one week. The number of new cases are dropping now and we hope things will stabilise soon,” he said.

V. Ravi, senior professor and head of Neuro Virology at NIMHANS, also part of the State’s COVID-19 expert committee, said Bengaluru Rural had a low overall prevalence of 28.7% till mid-September. “While infections in the core city (Bengaluru Urban and BBMP zones) peaked till the beginning of October and started declining, the surge in Bengaluru Rural has begun now. More cases are being detected as the higher rate of testing is being maintained,” he explained.

Mysore Sanjeev, convenor of Project: Jeevan Raksha, a public-private initiative involving Public Health Foundation of India, Indian Medical Association, and Proxima, a management consulting firm, said a high recovery rate (due to which there is a decline in active cases) could also be due to the tweaked discharge policy that does not mandate compulsory testing before declaring a positive patient as recovered.

“There is a higher chance of COVID-19 patients, especially in smaller towns, being officially declared as recovered, without being fully recovered,” he said.

Pointing out that the sharp downward trend in active cases indicates that there is a significant drop in the number of new positive cases in October, Mr. Sanjeev said, “As per our analysis, the average number daily cases and deaths in Karnataka was 9,500 and 102 respectively between October 1 to October 10. This has reduced to 4,200 and 53 respectively from October 21 to 31. Further, TPR has also dropped from 12% to 10%, which is a good sign.”

All districts except Bengaluru Rural see decline in active cases in Oct.
Share