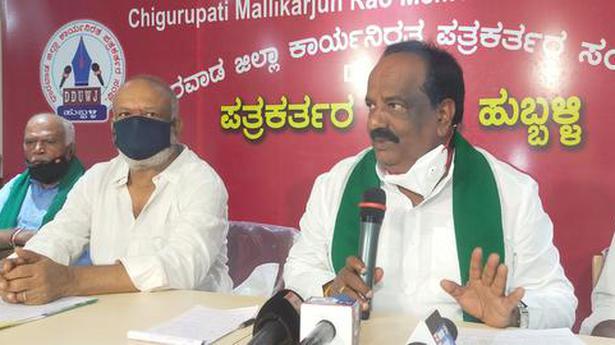 N.H. Konaraddi, national general secretary of the Janata Dal(Secular) and former MLA, has alleged that despite opposition from State leaders, Congress leaders in Dharwad district had entered into an unholy alliance with the Bharatiya Janata Party in Navalgund taluk for the sake of power.

Addressing presspersons here on Friday, Mr. Konaraddi alleged that the president of the Dharwad Rural district unit of the Congress, Anilkumar Patil, was telling blatant lies to cover up his decision on going ahead with the alliance in the Navalgund Town Municipal Council just for the sake of grabbing power.

Mr. Konaraddi said that discussions between the Congress and the JD(S) went on for three hours for forging an alliance in the municipal council, which however were not fruitful. But now Mr. Patil was telling a lie that no discussion was held, he alleged.

“The truth is that the BJP gained power in the municipal council because of support from the Congress. But Mr. Patil was now claiming that they did not extend support to BJP,” he said.

President of Dharwad district unit of the JD(S) B.B. Gangadarmath said that the district Congress unit leaders were unnecessarily issuing false statements against the JD(S) and had conspired against the party.

In the 23-member Navalgund Town Municipal Council, the JD(S) has nine members, the Congress seven, the BJP six, and there is one independent.