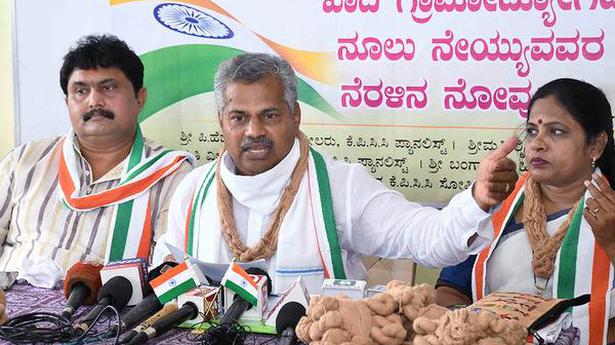 Emphasising the need to make wearing of khadi once a week compulsorily for government employees and degree students, KPCC media analyst P.H. Neeralakeri has urged the State government to immediately release pending grants to the tune of ₹55 crores to various khadi production centres across the State.

Addressing presspersons in Dharwad on Saturday, Mr. Neeralakeri said the State government should take a policy decision to promote khadi products and make wearing khadi once a week mandatory for all the government employees and degree students.

He urged the government to come out with a revival package for the khadi and village industries. “To begin with, the State government should first release the pending grants of ₹55 crore to various khadi production centres in the State. Five khadi sanghas in Dharwad district too have not been released pending grants of ₹7 crore,” he said.

Setting a deadline of one week for release of the pending grants, Mr. Neeralakeri said the Congress would be forced to launch an agitation if the government failed to release the grants.

Another KPCC media analyst Shailaja Hiremath from Koppal said that because of changed market scenario, khadi and village industries had been severely affected and there was need to ensure proper market for the khadi products. Apart from ensuring that a proper marketing network was in place, the government should support the khadi sector through regular procurements of khadi products, she said. Congress leaders Bangaresh Hiremath, Veena Mahanthesh, and others were present.