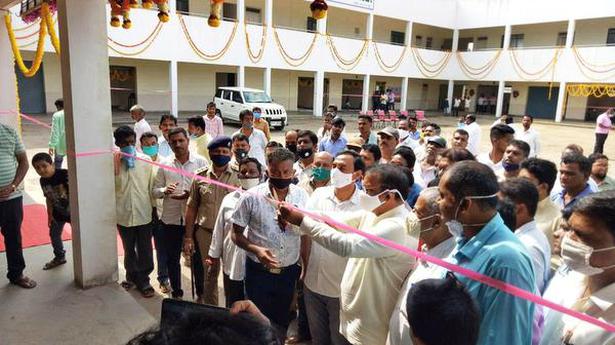 The new market that has come up on an one acre land alongside the Bengaluru-Pune National Highway has 16 shops and 10 temporary sheds for auctioning and sales. It has been developed by the Department of Horticulture and the city corporation at a cost of around ₹ 2 crore.

The demand for a spacious and well-equipped wholesale horticulture market was long pending. The Department of Horticulture approached the city corporation more than a decade ago. The market functioned in the Gandhi Nagar till recently. Wholesale merchants organised auctions in the morning and bought flowers from growers in lots on open ground with only a few facilities available. The small space used to be congested and commuters inched their way through frequent traffic jams.

The city corporation handed over some land to the department and entered into a memorandum of understanding with it.

The flower auction centre was built last year and infrastructure, including roads, water and power supply, canteen and resting places, was completed recently.

The process of allotment of shops got delayed, reportedly because the two government agencies did not communicate properly. Some merchants also alleged corruption and politicisation in the allotment process.

All these issues were addressed and the allotments were made in a transparent manner. “We also got a functional revenue agreement with the city corporation that enabled us to open it,” said Deputy Director of Horticulture Ravindra Hakati.

“We have allotted a quarter of the number of shops to farmers. However, merchants are demanding more. We will start temporary shops now, and then expand the outlets in future,” he said.

Mr. Benake said that the market would boost the income of flower farmers. “A committee headed by Deputy Commissioner M.G. Hiremath will be in charge of the functioning of the centre, including the auction process. We will improve the facilities at the centre in stages and make it one of the best in the State,” he said.

He urged merchants to avoid trading at other places and to make the maximum use of the existing facilities.