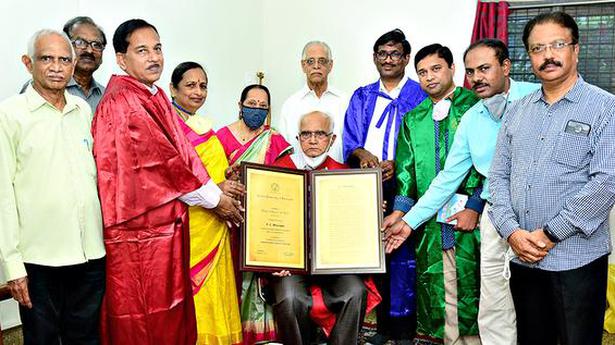 The honour to Mr. Bhyrappa had been announced at the recently concluded 5th Annual Convocation held on the university campus near Kalaburagi and Mr. Bhyrappa had not attended the event, which was kept low-profile owing to the COVID-19 pandemic.

“Western literature is not a role model for my novels. Ramayana and Mahabharat are the models for my novels. The roots of my literature are in Indian culture,” he said after receiving the honour. The novelist also released Belari, Betta Kuruba, Sanketi, Erava, Arebhashe, and Pattegara books published by the CUK and a handbook of Kannada Prosody authored by B.A. Viveka Rai and published by the Centre for Classical Kannada on the occasion.