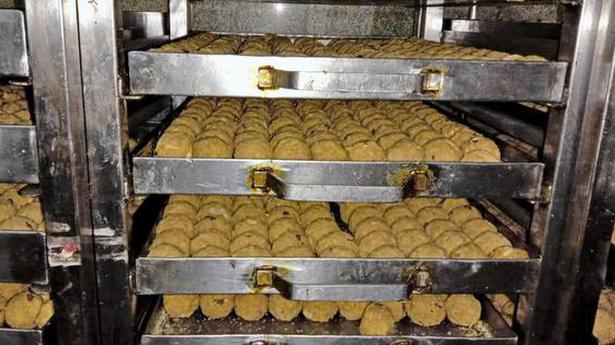 Sri Malai Mahadeshwara Temple has secured a licence under the Food Safety and Standards Act (FSSAI) for the “prasada” it serves to devotees visiting the temple atop M.M. Hills in Chamarajanagar district. With this, laddu and prepared food (served twice a day as part of the Dasoha programme) are now FSSAI-certified.

Sri Malai Mahadeshwara Kshetra Development Authority, Mahadeshwara Betta, Hanur taluk, had sought registration under FSSAI six months ago and the licence was issued recently by the Designated Officer, FSSAI, Chamarajanagar. The licence is valid for one year and needs to be renewed every year, subject to meeting the conditions laid down under the Act.

The licence had been availed as a part of Blissful Hygienic Offering to God (BHOG), a project initiated by FSSAI for places of worship across the country for complying with the food safety guidelines laid down under the Act while preparing prasada.

Authority secretary Jaya Vaibhava Swamy said: “We completed all mandatory registration processes and thereafter the licence was issued to us. This has doubled our responsibilities as highest safety and quality standards have to be adhered to in the preparation of prasada.”

The secretary said the temple sought the FSSAI licence on the advice of the Minister in-charge of Chamarajanagar district S. Suresh Kumar, who had inspected the prasada preparation a few months ago. He said the quality control measures as mandated under the Act would be examined once in three months by the representatives of FSSAI.

“On the suggestion of the Commissioner, Department of Muzrai, the food safety standards maintained at Sri Kshetra Dharmasthala were studied and the people in charge of the temple kitchen underwent training. Subsequently, we applied for FSSAI licence.

All quality control protocols are being met,” he said. Mr. Swamy said the temple has the capacity to prepare 50,000 laddus every day. However, on an average, 20,000 to 25,000 laddus are prepared and during peak season (before COVID-19), laddus were prepared to the installed capacity because of the rush of devotees.

The Malai Mahadeshwara Kshetra Development Authority has revised the price of laddu prasada with effect from November 8 based on the expenditure incurred on making a 100 gm laddu. The price of each laddu has been revised from ₹20 to ₹25.

Meanwhile, the temple will remain closed for devotees from November 13 to 16 as a measure to contain COVID-19, ahead of Deepavali. The order was issued by Deputy Commissioner M.R. Ravi on Monday.