Sandalwood museum may be shifted to palace premises 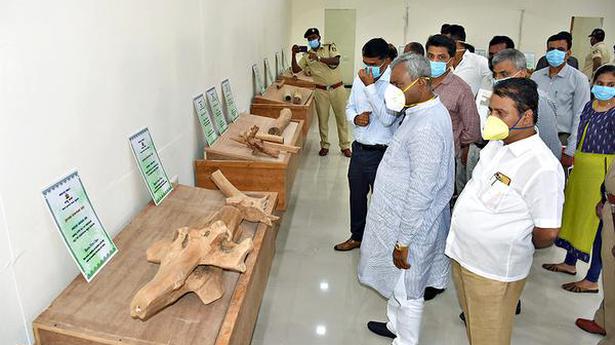 Visitors to Mysuru palace may soon get to see another attraction here as plans are afoot to shift the ‘sandalwood museum’ being developed at Aranya Bhavan in Ashokapuram to the palace premises.

Disclosing this here on Monday, Minister in-charge of Mysuru district S.T. Somashekar, who, after visiting the sandalwood museum that is nearing completion, said it was being planned to shift it to the palace premises. He added that he would consult Forest Minister Anand Singh and Chief Secretary T.M. Vijayabhaskar, who is the chairman of Mysuru Palace Board, in this regard.

Mr. Somashekar said many farmers had started cultivating sandalwood on their lands responding to the initiatives taken by the Forest Department for its promotion. In a bid to expand private cultivation and establish a one-stop destination for all information on sandalwood and its farming, the museum was planned and is now coming up at Aranya Bhavan.

Chief Minister B.S. Yediyurappa had given his approval to the proposal of encouraging more farmers to take up sandalwood farming, giving them all relevant details about the crop, through the museum.

However, since not much space was available for the museum at Aranya Bhavan and the area cannot accommodate more visitors, suggestions have come in for shifting the museum with all its collections to the palace premises as the area there was bigger and can also act as another attraction for tourists, bringing additional revenue. A decision in this regard will be taken soon after consultations with the Chief Minister, who will be requested to inaugurate it, he said.

During the Minister’s visit to the sandalwood museum, the forest officials said sandalwood supplied to the depot by farmers and others (grown in private lands) was categorized based on the quality and accordingly stored safely in the sandalwood depot. The stock was auctioned once in two years.

Earlier, Mr. Somashekar held a meeting with the forest officials and discussed the museum project. The forest officials suggested establishing the museum on the palace premises instead of Aranya Bhavan. The museum can bring in revenue if it was set up at the palace premises which is a major tourist destination and draws lakhs of tourists every year. They said there is a huge demand for sandalwood and more steps were essential for safeguarding the trees.

The Minister said Mysuru is well-known for sandalwood reserves and felt the need to safeguard the trees besides promoting the steps taken by the department for bringing more farmers to take up sandalwood cultivation.

“Looking all these factors, a decision will be taken after discussions with the Forest Minister,” he told reporters here.

The museum is almost ready with the displays.

Sandalwood museum may be shifted to palace premises Mysuru
Share