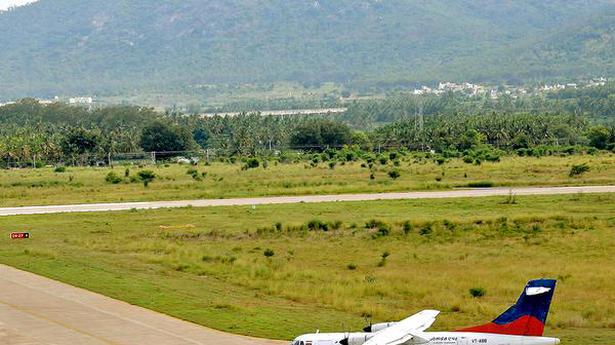 The proposed expansion of the Mysuru airport, which is pending since the last few years, is set to gather fresh traction with the State government’s assurance of releasing funds for the project.

This came to the fore at the Mysuru Airport Advisory Committee meeting held on Tuesday. Pratap Simha, MP, said Chief Minister B.S. Yediyurappa has assured release of ₹50 crore as first tranche to get the work started for land acquisition.

He said the financial approval and clearance by the Cabinet committee on economic affairs would be secured within this week, and the Airports Authority of India can fast track the runway extension and airport expansion project.

Mr. Simha said the Mysuru airport was by and large dysfunctional till the UDAN scheme launched by the NDA government gave wings to all such airports and brought flight travel within the realms of commoners. He said the subsidised fare for short-haul flights had made a difference to the fortunes of cities and expedited development and Mysuru was no exception. The UDAN scheme had underlined the originating air passenger potential of Mysuru and expansion would help achieve that potential, said Mr. Simha.

Apart from the airport, the Bengaluru–Mysuru highway was also being expanded and the work was scheduled for completion by September 2022, Mr. Simha added.

The expansion of Mysuru airport was beset with problems as there is a railway track on one side and national highway on the other side. Any expansion of the runway entailed diverting the four-lane Mysuru–Nanjangud highway. Hence, an underpass was suggested and it received technical and security clearances from the appropriate authorities.

The AAI requires an additional 182 acres for runway expansion besides 58 acres for a future terminal building complex.

R. Manjunath, director, Mysuru airport, said there were only two flight movements till 2015 but it had increased to 12 flight movements after the launch of UDAN scheme. Mysuru is connected to Chennai, Hyderabad, Bengaluru, Belagavi, Goa, and Kochi and there was potential for operating flights to Mangaluru, Coimbatore, Shirdi, and Tirupati. The Alliance Air was expected to announce its Mangaluru flight schedule and date of operation in due course, he added.