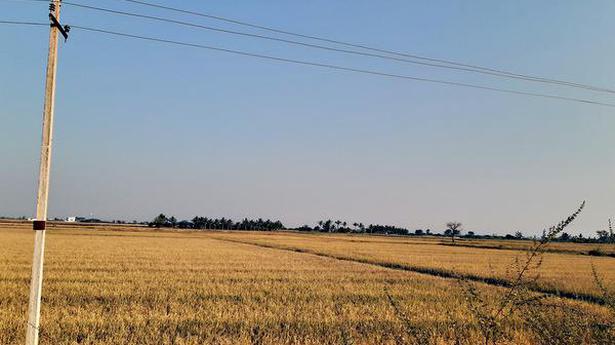 As much as 93,000 hectares of land irrigated by the Krishna and Bhima and also other sources have been taken up for cultivation in the district

Paddy growers who suffered crop loss in the recent rain and floods are again facing problems, including shortage of labour to harvest crops on time, burden in paying higher charges for paddy harvesting machines and also price crash in the open market.

Farmers whose paddy is yet to be harvested are worrying about shortage of labour and also paddy cutting machines as a majority of workers who had returned to their native places during lockdown have again migrated to big cities, including Bengaluru, Mumbai, Pune and Hyderabad, for livelihood. When compared to last year, the number of paddy harvesting machines that have arrived from Haryana, Punjab, Andhra Pradesh and other States are only a few due to the pandemic situation. Owing to shortage of labour and paddy harvesting machines, farmers are in a hurry to harvest paddy by paying higher rent and selling the produce at the available market prices to avoid damage to grain for any reason, including rain.

According to a farmer, he was forced to pay ₹ 2,200 per hour to harvest paddy despite the district administration issuing a strict warning to private paddy harvesting machine owners not to charge more than ₹ 1,900 per hour.

“If I do not pay as per their demand in a bid to adhere to the district administration’s caution, neither will they allow me to complete harvesting the crop nor will they give me the machine the next year,” he told The Hindu.

To address this problem, the Agriculture Department has let out a total of six paddy harvesting machines on rent for ₹ 1,300 per hour. When compared to the area covered, the machines are very few. Officials could have been provided with more number of machines to meet the demand, another farmer said.

Even after harvesting, farmers are facing another problem, i.e., low price. The present market price for a bag of paddy weighing 75 kg ranges from ₹ 900 to ₹ 1,300 depending on quality. “This is ₹ 500 to ₹ 600 less than last year’s price,” Shivareddy Patil, a young farmer in Kollur village, said.

The Karnataka Food and Civil Supplies Corporation has opened five paddy procurement centres under the minimum support price (MSP) scheme for 2020-2021 and asked farmers to register names from November 30 to December 30.

“The corporation has been directed to purchase paddy under the scheme which ensures ₹ 1,888 per quintal for Grade A quality and ₹ 1,868 for Grade B produce,” an official of the Food and Civil Supplies Department said.

The government’s decision to open procurement centres is causing disappointment to farmers. “Paddy growers who have already harvested their crops are selling grain at lower prices due to delay in establishing procurement centres and completing the online registeration process. By this time, they (officials) could have started registration enabling growers to sell grain at the price fixed under the scheme,” Mallikarjun Satyampet, farmer leader, said.