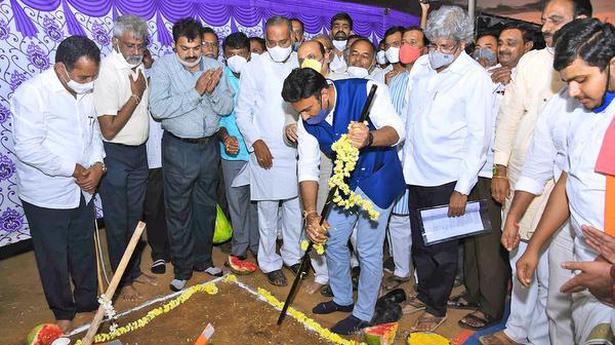 Initiating the foundation laying ceremony through a virtual platform from his home office Krishna in Bengaluru on Friday evening, Mr. Yediyurappa said that with the establishment of the medical college, the district would not only get better medical facilities but also the services of 890 medical and non-medical staff.

“Once the hi-tech government hospital gets established, the people of the district, who are dependent on neighbouring Dharwad and Davangere districts for better healthcare facilities, would get the same in Haveri itself. The medical college will also pave the way for economic and educational progress of the district,” he said.

Already, the State government has released ₹ 37.23 crore and an administrative officer too has been appointed, he said.

A sum of ₹ 28.75 crore would be utilised for power, water supply, digital library and other amenities. The main building of the college would have a 70-bed surgery complex, intensive care unit and ortho units.

The Chief Minister said that two hostels for boys and girls with a capacity to accommodate 375 students would be built. Every year, 150 students would be able to get admission to the medical college and in the coming years, steps would be taken to provide admission to 100 post-graduate students and 250 nursing and paramedical students, he said.

Mr. Yediyurappa also said that a ₹ 40-crore project for 24 x 7 water supply to the medical college campus and other projects would be sanctioned for the development of the college.

Presiding over the function held at the land allotted for the medical college in Haveri, MLA Nehru Olekar made the introductory remarks.