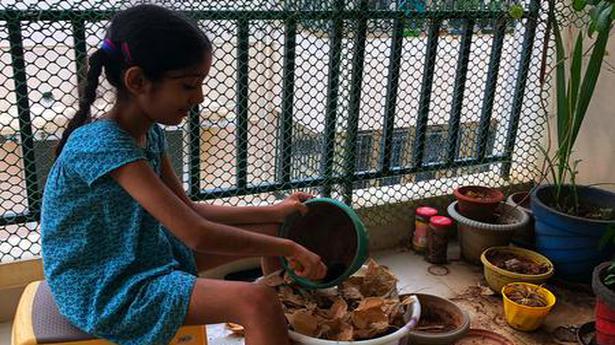 With a rise in terrace gardening, zero-kitchen-waste advocates are excited to note a parallel rise in people making their own compost and fertilisers at home

Kuppulakshmi Krishnamoorthy’s is a family of three… or three billion, if you also count the microorganisms stewing inside the two compost bins sitting on the balcony of her fourth floor apartment in Urapakkam, near Chennai.

Composting, along with gardening, is a childhood joy of Kuppu’s that she rediscovered in 2020, while quasi-homeschooling her eight-year-old daughter.

“I had been wanting to grow my own vegetables and compost for a while now. But it took staying at home for so many months and making our own meals every day to realise how much waste we create,” says Kuppu. For the past few months, the waste from every meal — peels, shells, coconut husk — and the grounds from every cup of coffee made, all go into an old bucket making do as a compost bin.

“If time permits, we will convince our apartment community to compost together. Who knows, maybe we can even sell it!” says Kuppu.

It was but natural that a rise in kitchen gardening would lead to a rise in composting at home, believes Bengaluru-based Vani Murthy, a pioneer dubbed ‘Compost Queen’ on social media.

Member of the city’s Solid Waste Management Round Table (SWMRT), Vani has been an advocate for decentralising waste management for a decade now, but the attention it has received in 2020, “has been phenomenal,” she says, “Everybody started growing food at home, but that movement also needed people to look for fertilisers. Rather than buying, they want to create their own nutrients for the soil.”

Her Instagram page, @womrani, saw a rise of followers from 5,000 before March to over 80,000 now, thanks to her steady stream of workshops, IGTVs and posts featuring composting hacks. “I am constantly holding meetings on my terrace. We have had people from Sikkim, and even China attend,” she says.

Bombarded by an overwhelming number of queries, Vani says she tells people to look at it as a trend but “make sure they understand why they are composting first. I tell them about how we are losing our resources, how compostable material gets trapped in landfills and releases methane, and how we need to regenerate soil quality by putting those nutrients back to the soil where they belong.”

Another member of SWMRT, Vasuki Iyengar, points out a probable reason for the rise in the interest in composting. “In the initial months of the lockdown, as families could not rely on maids and housekeeping staff, people in apartments would have to go downstairs and deposit their own kitchen waste. That exposure may have made them start thinking about composting,” he says.

Founder of Soil and Health Solutions, a waste management service in Bengaluru, Vasuki makes and installs different types of compost bins in the city. “Since June, I have been observing an increase in the number of online gardening and composting classes, and we are also receiving more online orders for bins,” he says. From April to October, SWMRT hosted 200 sessions on composting with an overall participation of 14,000 people from Bengaluru, Chennai, Mumbai, Pune and Goa, among others. Oota from your Thotta, another such community on organic gardening, has been hosting sessions every Sunday on Facebook and Zoom, with over 2000 views each.

For beginners on his Instagram, Vasuki has put up short videos on ‘jugaad’ or ‘dabba’ composting. “I explain how to turn paint buckets or takeaway food containers into compost bins,” he says.

Using old drums to store compost and covering them with cardboard is perhaps your best bet when stepping into the hobby, according to Chennai-based Archana Stalin. “Many communities in Chennai have started composting enthusiastically, but few have been successful. You need to be consistent for that,” notes the founder of farm rental service myHarvest Farms. “If the initial investment isn’t costly, you won’t feel guilty if anything goes wrong,” she adds. 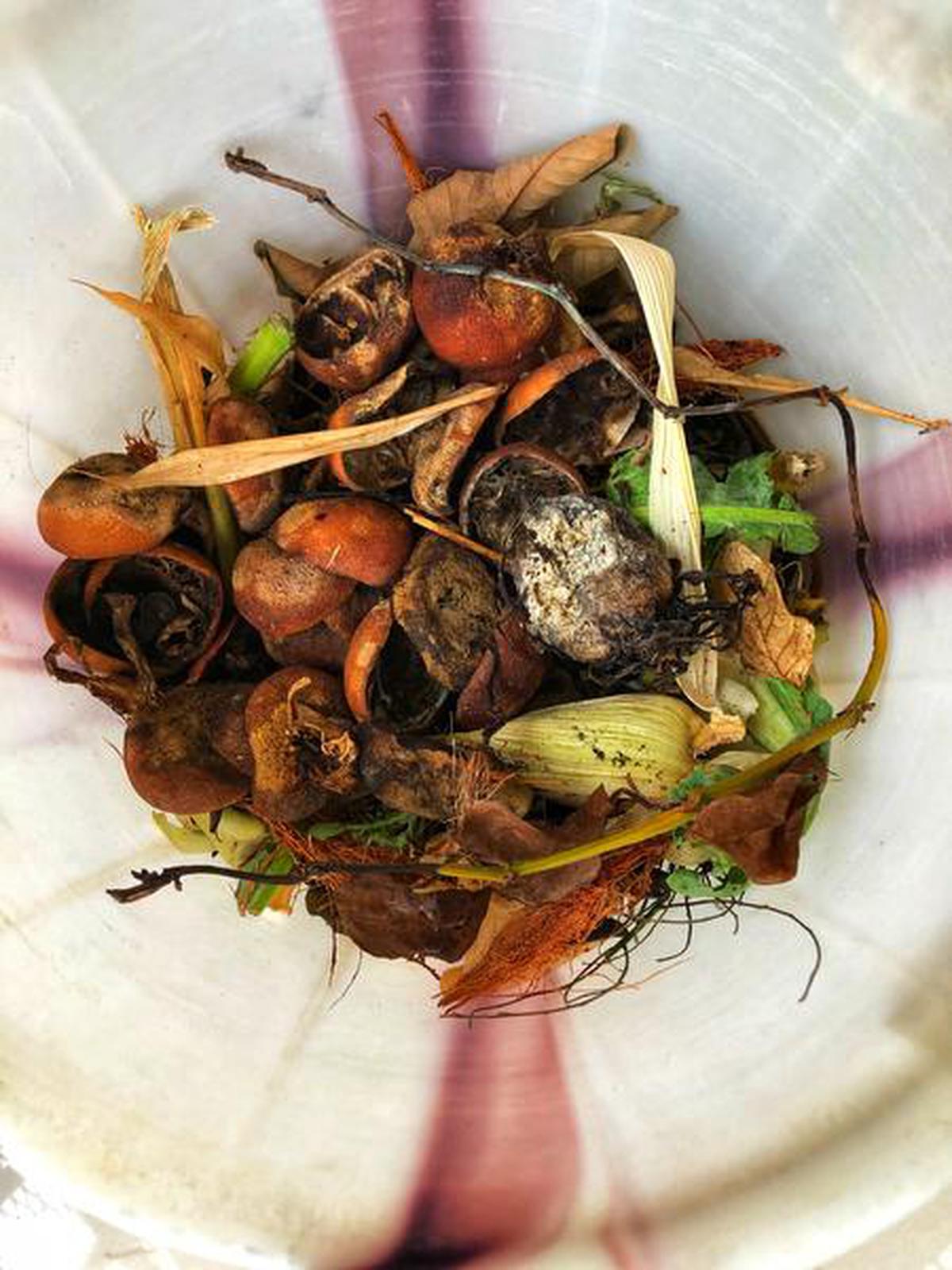 What compost looks like on Day 1. Try to maintain a brown-green-brown sandwich.

Archana recently hosted seminars on composting for eight corporates and schools, and noticed that the interest this year translated into application. “Parents sent me videos of their Class III, Class IV children composting at home,” she says.

Though she has been composting for about six years, even she learnt something new during the lockdown. “For the past four months, I have been doing my laundry with bio-enzymes I made myself,” she says. The path to zero waste often goes this way, she explains: from an interest in organic food, to kitchen gardening, to composting and then to making bio-enzymes. These are homemade cleaning agents — centre of focus for most of 2020 — made using citrus peels, jaggery and water. 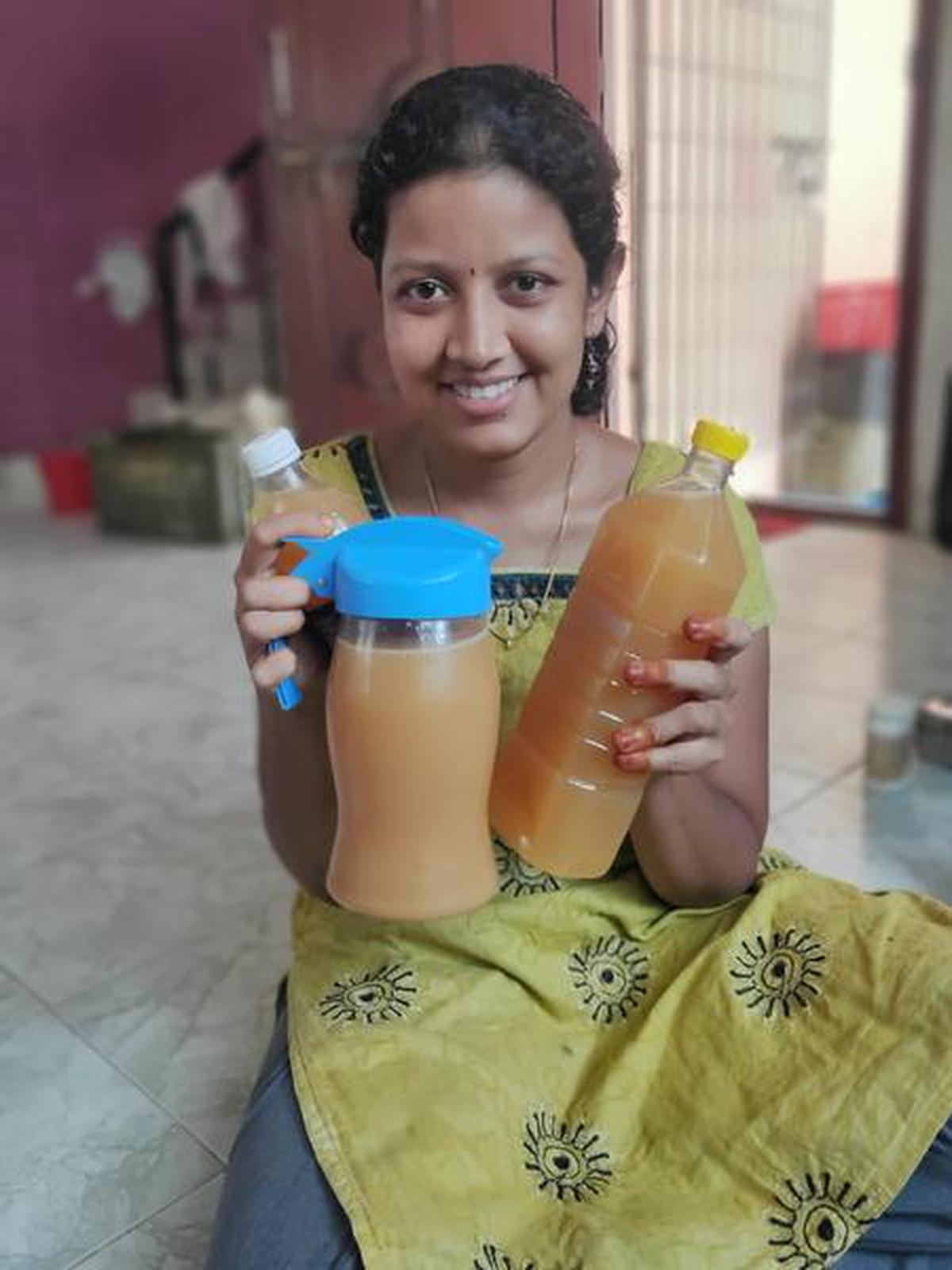 For Archana, it started the day she made huge quantities of lemon rice, resulting in peels and peels of citrus. “I couldn’t use citrus peels in composting as they go bad, so I needed to do something else with them. That’s when it struck me that I could make my own cleaning liquid,” she says, adding that the ease of the process made it better. “Fermentation happens on its own for three months, all I had to do was open and close the lid of the jar.”

Living a zero-waste life, says Archana, is a family effort, starting right from the segregation of waste. Kuppu, her partner and their eight-year-old could not agree more. With their daughter’s school shut, they are more conscious about the kind of knowledge they are imparting to her. “She always has so many questions, she’s an old soul in a kids body.”

Outside their window, lives a family of mynahs that Kuppu and her daughter observe. “Every day we see how living can be so simple, and how we choose to make it so complex,” remarks Kuppu, “Composting is just one of the changes we want to make towards leading a simpler life.”

Her bucket of microbes is one month away from being ready to use: “It smells wonderful, and I can’t wait.”