Mixed response from students in Mangaluru 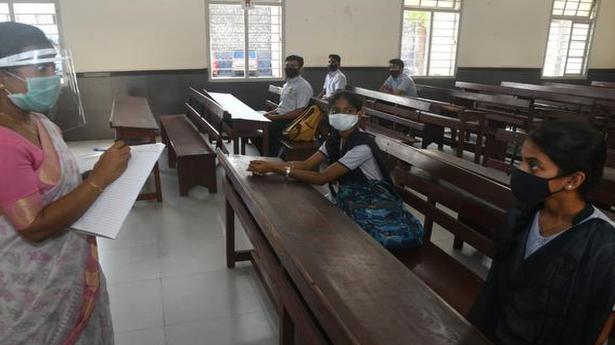 While a good number of graduate and postgraduate students turned up at some colleges, there was poor response in other colleges in Mangaluru on the first day of the opening of colleges on Tuesday.

A sizeable number among the 1,300 final-year degree students were seen at St. Aloysius (Autonomous) College. Postgraduate students of this college have been attending classes since October.

As per the standard operating procedure prescribed by the State government, the final year degree students coming to the college were asked to bring the consent letter of their parents and COVID-19 ‘negative’ certificate. “It’s good to be back with peers. Physically attending the classes helps in clarifying many doubts,” said Dhanush, a BA student.

Rev. Praveen Martis, Principal, said students are divided into two batches. While one set of about 40 students attend the classes from 9 a.m. to 1 p.m. another batch attends from 1 p.m. to 5 p.m. Six classes, with each of 45 minutes duration, are held every day for each batch. “We have blended offline and online mode of teaching,” he said and added the attendance of students on the first day has far exceeded their expectation.

Those attending college on Tuesday were the ones who have secured COVID-19 negative certificate following RT-PCR test done at the college on Saturday. On Tuesday, a set of health staff from the Urban Public Health Centre, Bunder, were at the college to carry out free tests of students, their parents and staff members. Among those who underwent the tests were Radha Poojary and Sunita Putran, who were doing their B.A. “Was a bit nervous. But with the friends around, I just went through the process,” said Ms. Sunita.

Except for students who had come to finish admission formalities, there were no students attending classes on the first day at the University College, Hampankatta. Of the 350 final year students, 40 have opted for physical sessions. “We do not have any testing facility at the college. Students have gone for tests at the facilities near their homes today. We hope to have students after three days,” said Principal A. Harisha.