Activists call for demolition of structure near Kabini backwaters 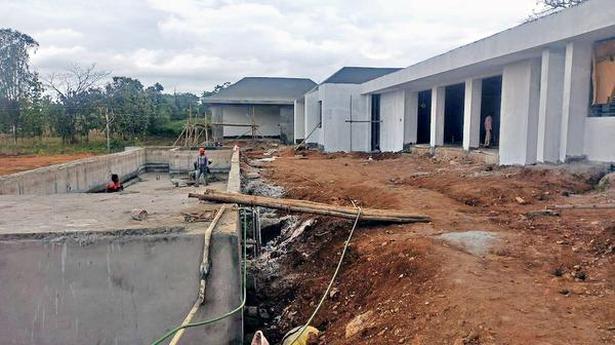 Construction at N. Belathur village is in violation of Eco-Sensitive Zone norms

Wildlife activists and a section of senior retired forest officials have called for immediate demolition of construction work of a resort within the Eco-Sensitive Zone of Nagarahole-Bandipur landscape close to Kabini backwaters.

The construction on survey number 142 and 144 at N. Belathur village was halted when the violation of the ESZ norms came to light early this year. However, activists allege that work has subsequently gathered pace.

What is significant is that the owner of the land was issued notice complete with government orders that the area where the construction was taking place was not only within the ESZ but was part of the Mysore Elephant Reserve and hence no construction can take place.

The local range forest officer has stated in a communiqué to landowner K.N. Narsimhamurthy that N. Belathur is part of the notified buffer zone of the Nagarahole Tiger Reserve. “The very objective of notifying the elephant reserve will be defeated if adequate measures are not taken to protect the elephants, their habitat and corridors,” said the authorities.

The Chief Conservator of Forests of Kodagu circle also visited the spot and surveyed the area and noted that there were six under-construction buildings measuring around 997.29 sq m equivalent to 11 guntas. But construction of private residences in ESZ cannot exceed two guntas and hence, there was a violation.

A retired Forest Department official, who has served as Principal Chief Conservator of Forests, said the construction is funded by a mine owner and the landownership was benami. He said this sort of construction requires land conversion from the Deputy Commissioner and it is obvious that no such permission has been granted. The owner was issued notices three months ago. He recalled that a fully functional resort was demolished on the banks of the Kabini river within the Bandipur Tiger Reserve buffer zone in 2008. Similarly, a villa project was stopped in the Bandipur buffer zone in 2010-11.

Joseph Hoover, member, State Board for Wildlife, said there are serious repercussions arising out of such flagrant violations and more people would be encouraged to take up construction and even question the ESZ if the construction was not stopped.