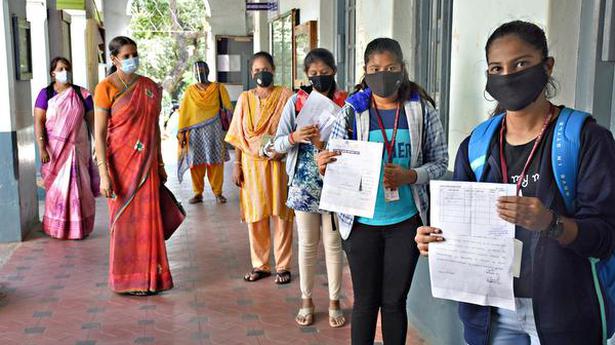 Degree colleges across Mysuru district reopened on Tuesday after nearly eight months. However, the response from students was tepid as only a few turned up to the classes conducted amid the fear of COVID-19 pandemic.

Students having COVID-19 negative certificates were allowed to attend classes held amid safety protocols even as the Department of Health and Family Welfare and the Mysuru City Corporation had deployed teams in some colleges for collecting swabs as the test was made mandatory, besides the parents’ consent letter to attend classes.

As of now, colleges have reopened for the final-year students pursuing graduate and postgraduate courses. Students were sensitised about the dos and don’ts in post-COVID-19 times before they stepped into sanitised classrooms wearing masks and sanitising their hands after mandatory thermal screening. Two students were allowed to sit in each bench. College managements had been told to sanitise the premises three days in advance.

Amid the COVID-19 fears, there were moments of joy as well among students as they could meet their peers after a long gap.

The Manasagangotri campus of the University of Mysore also reopened but the classes are expected to start from Monday to ensure that students and staff members undergo the test. As on Tuesday, nearly 450 students had undergone the test with the university setting up temporary swab collection centres at three places on the campus.

Registrar Shivappa told The Hindu that classrooms were being sanitised besides seating arrangements being done conforming to social distancing norms. “The department heads had taken steps accordingly for students’ safety. Test and parents’ permission are a must. However, it’s not mandatory for students to attend classes. They can continue to attend the online classes and other modes of learning if they wish,” he said.

Meanwhile, the Health Department has sent a list of all static testing centres and other centres undertaking COVID-19 tests to the colleges so that students and the staff make use of the facilities instead of waiting for the tests to be done on colleges campuses.

“It’s not possible to conduct tests in every college. They (students) can get the tests done in already established centres. In Mysuru city alone, there are around 20 static testing centres,” said a government medical officer.

At Maharani’s Arts and Science Colleges here, 400 students and the staff gave their swabs for the tests as a testing team was deployed for the purpose. The colleges witnessed low turnout as only a few students had come with COVID-19 negative certificate.

District Vector Borne Diseases Control Officer Chidambar said, “We can deploy more teams provided each college mobilises around 200-plus students for the tests. Hopefully, the testing process will be completed in the next two-three days.”

The MCC is also sending mobile testing teams to colleges on request. It is coordinating with the Health Department to complete the tasks on hand as they had been told to coordinate with the Department of Collegiate Education and college authorities – government as well private.

“Wherever possible, they can get the tests done, even in the PHCs,” said MCC Health Officer D.G. Nagaraj, adding that testing in colleges will go on till Saturday.

Dr. Nagaraj said 130 staff and 300 students underwent tests at the Maharani’s Arts College. Those having negative results in tests done in the last three days are allowed to attend classes. The tests in colleges are being conducted since the past four days and the testing schedule had been finalised till Saturday.

MYSURUDegree colleges across Mysuru district reopened on Tuesday after a gap of nearly eight months. However
Share