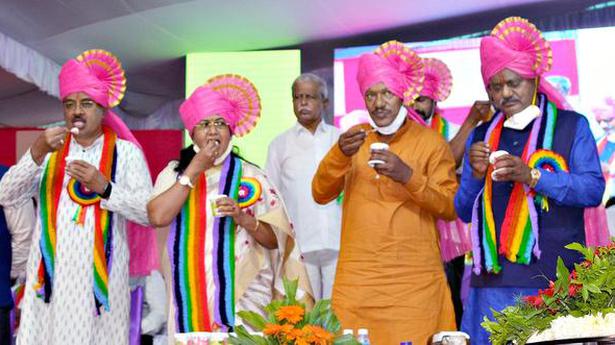 Karnataka Milk Federation (KMF) chairman Balachandra Jarkiholi has appealed to farmers, especially those in the northern districts, to switch to dairy farming and animal husbandry from crops such as sugarcane to earn better profits.

He was speaking at the 67th National Cooperative Convention on the KMF premises here on Wednesday.

“Most farmers in North Karnataka are dependant on sugarcane. Despite being a cash crop, it does not give enough profit. Farmers have to suffer from delayed payments and also, non-remunerative prices. A small farmer who grows sugarcane makes only around ₹ 30,000-₹ 40,000 per year. But an animal farmer makes around ₹ 60,000-₹ 70,000 per year. That is why it makes sense to take up animal farming,” he said.

“I have been convinced about this after I became KMF chairman and went around the districts in South Karnataka. Farmers in those districts, even drier districts such as Kolar, are into dairying on a large scale,” he said.

Mr. Jarkiholi is the chairman of a private sugar factory. His four siblings head as many sugar factories in Belagavi district.

“The KMF started with a total procurement of 9,000 litres of milk per day, 40 years ago. Now, we are procuring around 89 lakh litres per day. But we hope to double the procurement amount in five years,” he said.

KMF would provide free insurance facilities to all the 12 lakh milch cattle in the State, he announced. In case of death of cattle, the owner will receive between ₹ 40,000-₹ 50,000 per cow or buffalo, he said.

“We plan to set up a mega dairy in Belagavi. I have told officers to increase local procurement to 5 lakh litres from the 2 lakh litres now. We want to introduce new technology and methods in procurement, processing and marketing,” he said.