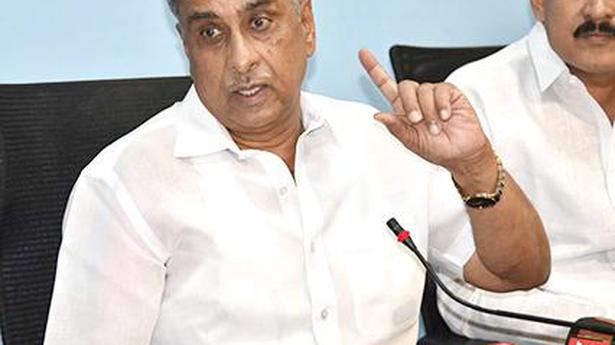 Stating that the Veerashaiva Lingayat Development Corporation has been set up without any proper planning or thinking, Lingayat leaders from the Congress and the Janata Dal(S), including the former Minister Basavaraj Horatti, have urged Chief Minister B.S. Yediyurappa to provide 16 % reservation for the community in employment and education like the way it had been done in Maharashtra for the Maratha community.

Addressing presspersons here along with Dharwad district unit president of Akhil Bharat Veerashaiva Mahasabha Gururaj Hunasimarad and the former KPYCC State president Sadanand Danganavar, Janata Dal(S) leader Basavaraj Horatti said that the corporation for Veerashaiva Lingayat community had been constituted in a hurry without consulting experts and without properly planning its composition.

“As per data provided by Statistics Department, there are 1.18 crore members of Veerashaiva Lingayat community in the State. Such corporations can only be of help to small communities. But for bigger communities such as Lingayats, even provision for maximum grants will not be of much use,” he said.

To a query, he clarified that he would neither welcome nor oppose the development corporation as the government was yet to come out with details on its composition and grants. “But we want the government to provide 16 % reservation and also inclusion of the community under the Union government list of Other Backward Classes,” he said.

To another query, Mr. Horatti clarified that the issue of independent religion for Lingayat was another issue and the fight for it would continue. “Let us not mix up issues, as independent religion is before court and it will take its own course. But now as the development corporation has been set up, a confusion has been created and we want the government to provide us 16 % reservation,” he said.

Mr. Gururaj Hunasimarad said that Veerashaiva Mahasabha welcomed the formation of the development corporation but as it had been done in a hurried manner, it would not serve any purpose. “So we want the government to provide 16 % reservation like in Maharashtra so that students and youths of the community benefit,” he said.

Mr. Hunasimarad said that although a big community in the State, its members are facing hardships especially those belonging to lower and middle income groups and provision of 16 % reservation would help them. Congress leader Sadanand Danganavar and the former councillor Rajanna Koravi too concurred with him.