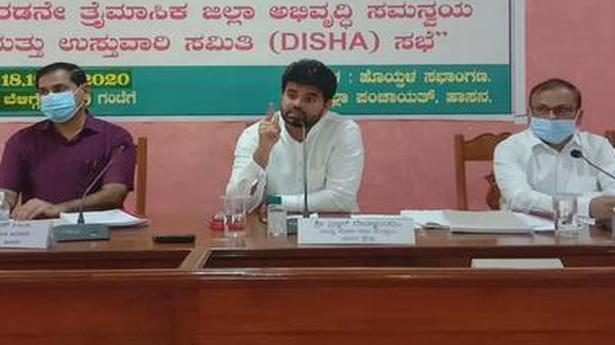 Former Minister and Janata Dal (Secular) leader H.D. Revanna has alleged that there had been large-scale corruption in Hassan district since he stepped down as Minister in charge of the district, after the JD(S)-Congress coalition government came to an end.

Speaking at a DISHA meeting in Hassan on Thursday, Mr. Revanna said a private educational institute near KSRTC new bus stand had been allowed to encroach upon one-and-a-half acre government land. The district administration had failed to withdraw the land from the institute. “I will prove that the institute encroached upon the land with all relevant documents. I will resign as MLA if I failed to prove the encroachment”, he said.

B.A.Jagadish, Assistant Commissioner of Hassan sub-division, said the administration had issued a notice to the education institute to recover the land. However, the institute had moved the Court challenging the notice. The matter had been posted for November 28 in the court, he added.

Further, Mr. Revanna said the construction of railway overbridge near the new KSRTC bus stand in the city had shown no progress in the last one year. There had been no progress in land acquisition for the Belur-Chikkamagaluru railway line either.

Hassan Deputy Commissioner R. Girish also took Railway officials to task for the slow pace of the work. He said only four pillars had been installed all through the year.

Arsikere MLA K.M. Shivalinge Gowda alleged that the quality of the widening of NH 206 connecting Bengaluru and Honnavar, going on right now, was bad. “I was under the impression that NHAI would do good quality work. But, many roads completed by taluk panchayats are far better. Being a contractor myself, I can prove the sub-standard work done by the contractor”, he said.

Lok Sabha member Prajwal Revanna, who chaired the meeting, said that he would inspect the road work next week and if he found the quality poor, he would write to the Centre for an inquiry against the contractor.

Senior officers of Hassan district administration were present at the meeting.