Action to be taken against those forcing a bandh on people 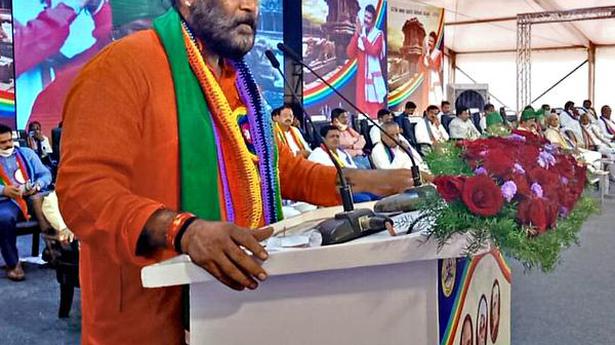 Referring to the Ballari bandh call given by a few Ballari-based organisations to oppose the State government decision to bifurcate the district to form a new Vijayanagara district, Forest Minister and Ballari in-charge B.S. Anand Singh has said that stringent action will be taken if anybody or any organisation forced people to observe a bandh.

Speaking to media representatives who met him at Amaravati Guest House in Hosapete on Thursday, Mr. Singh, however, clarified that the administration would not come in the way of the protesters if the bandh, scheduled for November 26, was observed or a protest staged without disturbing routine life.

“Keeping people’s interests in mind, Ballari district is going to be divided into two for administrative purposes; just as it was done in the case of Ramanagaram and Yadgir districts. The formation of the new Vijayanagara district by carving out the western taluks of Ballari district is a long-standing demand and the government has positively responded to it by giving approval to the proposal in a recent Cabinet meeting. Those who oppose the decision have every right to register their discontent through peaceful protest and demonstration. The government would not, however, allow any kind of disturbance to public life in the name of protest or bandh,” he said.

Asked about Ballari city MLA G. Somashekhar Reddy’s opposition to the bifurcation of the district, Mr. Singh blamed the media for instigating the MLA against the decision. “Which taluk in undivided Ballari would go to the new Vijayanagara district and which will remain in Ballari is yet to be determined,” he said.

Later, at the All India Cooperative Week celebrations organised at the Municipal High School Grounds in the city, Mr. Singh again appealed to the people to support the bifurcation decision.