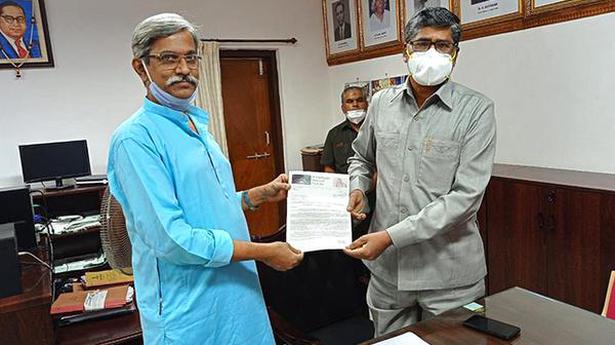 A controversy erupted on Wednesday over Gulbarga University’s decision to confer honorary doctorate on artist Mallikarjun Korwarkar at a convocation ceremony scheduled for Friday. Mr. Korwarkar is said to have plagiarised the painting works of renowned artist S.M. Pandit.

Krishnaraj Pandit, son of late Dr. S.M. Pandit, and artists from Kalaburagi have strongly opposed the Syndicate’s decision recommending Mr. Korwarkar’s name for the honorary doctorate in the field of painting.

Mr. Krishnaraj Pandit has, in a letter addressed to Governor Vajubhai Vala, urged him to stop the honorary doctorate from being conferred on Mr. Korwarkar.

Mr. Krishnaraj Pandit told The Hindu that Mr. Korwarkar’s claim that he studied art under Dr. Pandit’s guidance is completely false. He said that the Syndicate members have been wrongly influenced by a person who claims himself to be an artist.

Mr. Krishnaraj Pandit also showed a few original paintings of Dr. S.M. Pandit and also those said to have been copied by Mr. Korwarkar.

“His works are not original but digital canvas prints overlapped by oil paint, and, they bear his signature; this is a sheer case of plagiarism of fine art,” he said.

The Hindu tried to contact Mr. Korwarkar for his views but his phone was not reachable.

According to sources, the university received 20 applications for honorary doctorate of which nine names were finalised and sent to the State Selection Committee.