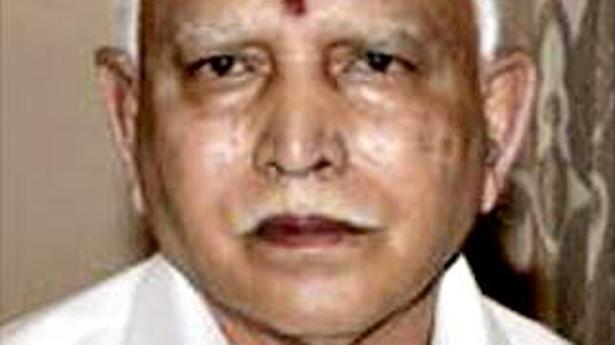 Mr. Yediyurappa had been to Delhi two days ago and met BJP national president J.P. Nadda.

This set off intense lobbying among legislators to make the cut to the Cabinet this time. Water Resources Minister Ramesh Jarkiholi, who has been camping in the national capital, met BJP national general secretary (organisation) B.L. Santhosh and reportedly lobbied for Cabinet berths on behalf of leaders who joined the BJP from other parties. Mr. Jarkiholi has been lobbying hard to ensure all defectors are inducted into the Cabinet, sources said. Apart from Munirathna, who recently won the Assembly byelection, three MLCs — N. Nagaraju (MTB), R. Shankar, and A.H. Vishwanath — are aspirants.

A delegation led by M.P. Renukacharya, MLA, who met party State president Nalin Kumar Kateel on Thursday, met the Chief Minister on Friday morning, and demanded that there be a Cabinet reshuffle, “non-performing” Ministers be dropped, and they be inducted in their place. However, the Chief Minister reportedly made no promise and said the party national leadership would decide whether it would be an expansion or a reshuffle. Mr. Renukacharya said while he had made his case to be given an opportunity, he would not create a ruckus or indulge in any dissidence, whatever may be the outcome.

Several senior party MLAs, including Appachu Ranjan and Thippa Reddy, have been making a similar pitch, sources said. “There are several of us who have been legislators for four or five terms but never been Ministers. But there are leaders who have been Ministers whenever our party has come to power. I think they should make way for us,” Mr. Ranjan said. Mr. Vishwanath said only Prime Minister Narendra Modi and god knew what would happen and that he too was an aspirant.