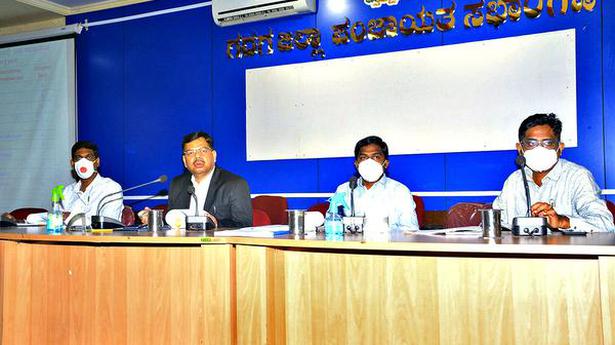 The district-in-charge secretary for Gadag Mohammed Mohsin has asked officials to complete the survey on houses damaged by floods and downpours in Gadag district at the earliest and to expedite the process of disbursement of relief to beneficiaries.

Chairing the review meeting at Zilla Panchayat Hall in Gadag on Friday, Mr. Mohsin emphasised the need for disbursing calamity relief as per NDRF guidelines to beneficiaries. Stating that the crop survey had been completed, he asked the officials to complete the online registration process at the earliest.

He said that providing land for a graveyard was equally important and asked the authorities to take steps to provide basic amenities and infrastructure in all villages. He asked the officials to identify suitable government lands and allocate the same for development of graveyards in 111 villages in the district.

Emphasising on the need for strictly adhering to the COVID-19 advisory, Mr. Mohsin said that while the pandemic was under control, the authorities should be prepared to face any eventuality. Referring to the reopening of colleges, he asked the Health Department staff to visit colleges and conduct COVID-19 Rapid Antigen Test on students.

The district-in-charge secretary sought details on the Nagarotthana Yojane, 14th Finance Commission Projects, Swachh Bharat Mission, AMRUT and other projects and asked the officials to work towards completing the projects within deadlines. Apart from constructing toilets in rural areas, steps should also be taken to sensitise rural residents on usage of the toilets, he said.