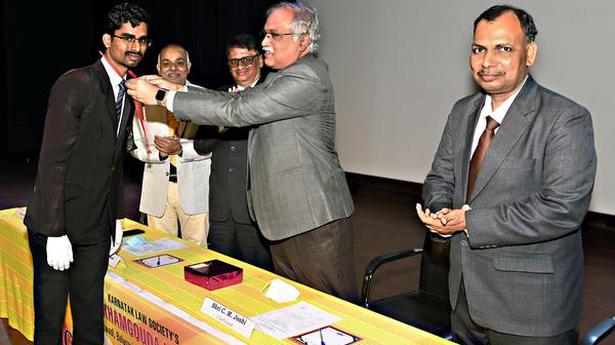 “The Supreme Court of India is considering putting in place a system where advocates can file applications online,” C.M. Joshi, Principal District and Sessions Judge, said in Belagavi on Friday. “Following the directions of the Supreme Court, courts in Belagavi will also allow filing of applications online in the near future,” he said. He was speaking at a programme to distribute awards to meritorious students of Raja Lakhamagouda Law College.

“Thinkers like Richard Susskind have argued that at least 60% of disputes will be fought online in the coming years. This is an important observation as several times we keep hearing that the educational system and the legal fraternity does not keep pace with advances in modern technology. All young graduates should keep abreast of legal and technological developments,” he said. He quoted from Stephen Covey, the author of Seven Habits of Successful People, saying ‘One should always keep sharpening your saw’.

He added that all classical texts should be reinvented in modern times.

“We talk about alternative dispute resolution mechanisms like negotiation and mediation. We should remember that this is an ancient technique as Lord Krishna himself was engaged in negotiating and mediating in the Mahabharata. We also speak of gender justice now a days. We should realise that texts like Manu Smriti and Yajnyavalkya Smriti had given several principles that stood for gender justice and gender equality. We should go to the original texts to understand them properly. We have forgotten them under the light of new and modern laws brought during the British regime and independent India,” he said.

“Young students of law should reinvent ourselves. They should refer to books like The Constitutional and Legal History of India by Justice Rama Jois,” he said. He also asked students to study the books on future of professions and future of law by Mr. Susskind. “Completing your degree should not mean an end to your education but a beginning,” he said.

He presented the M.K. Nambyar Memorial gold medal to Vijay Kumar Budri, who got the highest marks in Constitutional Law. The medal and the prize money is instituted by Attorney General of India K.K. Venugopal, in memory of his father.

Students like Sachidanand Patil, Trupti Sadekar, Megha Somannanavar, Ankita Patil, Sachin Chauhan and others spoke about their experience in the college. Ladies Representative Anuja Belgaonkar proposeda vote of thanks.