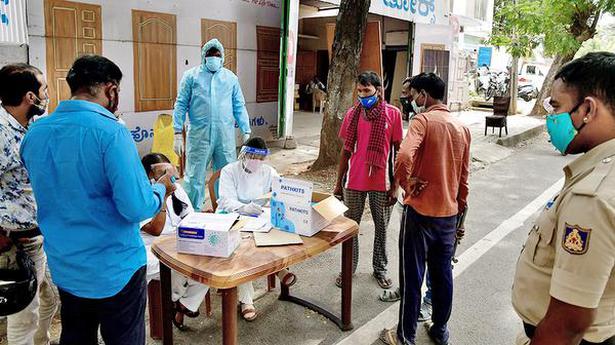 Anticipating what is largely being touted as a ‘second wave’ seen in many parts of the world, private hospitals and nursing homes are calling for a single nodal agency to streamline handling COVID-19 at the State level. At present, there are too many agencies and departments with little coordination among themselves, they allege.

Prasanna H.M., president-elect, Private Hospitals and Nursing Homes Association (PHANA), said hospitals are being made answerable to many agencies. “They are unnecessarily troubling us. Different agencies ask us for different data – deaths, admissions, recoveries, number of tests. It has become a nuisance and some of our staff are doing only this through the day,” he said.

Recently, showcause notices were issued to seven hospitals by the BBMP under the KPME Act for suspension of licences allegedly for not complying with the direction of the civic body to reserve beds for BBMP-sponsored COVID-19 patients. According to the BBMP, hospitals are supposed to reserve 50% of beds in each category i.e., general ward, HDU, ICU and ICU with ventilators.

PHANA president R. Ravindra said in the case of four of the hospitals, they had actually complied with the requirements but had been pulled up due to “communication gap”.

In addition to this, hospitals said they have been receiving emails from suspicious looking IDs seeking data. “Usually, government agency mails come from domains such as .in. We are receiving mails from domains such as Gmail without mentioning designation or anything. We are afraid to share data, and when we try replying seeking identity, the response is invalid ID,” Dr. Ravindra said.

Under these circumstances, a single-point authority would be ideal, he said. Pointing out that such committees were formed earlier into the pandemic too, he said they failed to bear fruition as they fizzled out after a meeting or two.

The medical fraternity is under a lot of mental and physical stress. Too many people trying to boss over us. Data is with the Health Department, power is with the BBMP. Inter-department sharing of data is not happening. We are being called for meetings by the BBMP sometimes, the DC, the Health Department, and the Chief Secretary. Who is going to address our issues? In case the situation worsens, we need clear cut solutions,” Dr. Ravindra said.