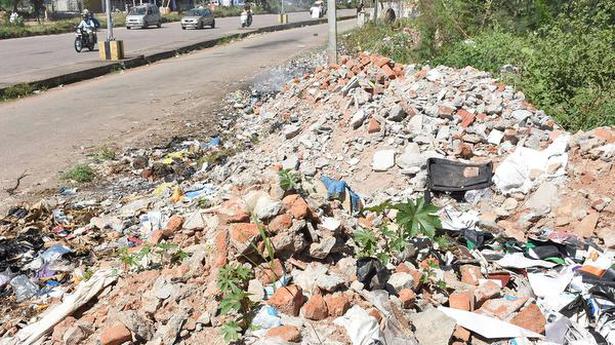 The illegal dumping of building and demolition debris along the Outer Ring Road (ORR), marring the city’s beauty and heritage value, has woken up Mysuru Urban Development Authority (MUDA), which has resolved to crack down on those dumping wastes on the vacant land and initiate legal proceedings against them after a one-time clearance of the already-dumped rubble on the road.

It has identified 13 hotspots among 30 vulnerable sites on the ORR where building wastes were prominently and regularly dumped, causing unhygienic surroundings and health hazard as a lot of residential layouts have come up around the ORR.

MUDA Chairman H.V. Rajeev told presspersons here on Saturday that the MUDA and the Mysuru City Corporation have to work together for restoring the beauty of the city which had earned the reputation as the cleanest city under Swachh Bharat. Importantly, the support and cooperation from the public was crucial for keeping our vicinity uncontaminated.

The discarding of building and concrete wastes besides solid wastes was also prominent on the vacant plots in MUDA-approved layouts.

In a bid to restore the beauty along the six-lane ORR, the MUDA has proposed one-time clearance of the already discarded rubbish on the ORR and this exercise will be carried out until November 28.

“Once the debris was cleared, it is henceforth prohibited to dump wastes again at those spots. Such debris has to be disposed of at the area identified for this purpose by the MCC at the Sewage Farm in Vidyaranyapuram,” the MUDA chairman said. It is not just MUDA’s job to keep our surroundings clean. If everyone joins hands with the MUDA and MCC, the city will retain its beauty. The MUDA has urged the public to share photographs of those dumping wastes on Ring Road or any other vacant plot to the Whatsapp number 88840-00750 and it will initiate legal proceedings against the offenders.

Mr. Rajeev said the MUDA has proposed to constitute vigilance squads to keep an eye on the public discarding the waste and they would be patrolling hotspots and other locations to prevent illegal dumping.

Plans are also afoot to install closed circuit television cameras at select locations, mostly around the hotspots, to stop the public from resorting to illegal dumping.

Besides lodging complaints against the offenders, the vehicles used to dump the waste would also be seized, the MUDA warned.