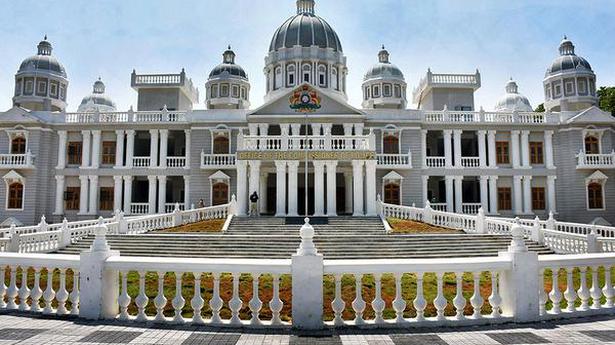 The Mysuru City Police Commissioner’s office, built at a cost of ₹19.36 crore, on Mirza Road in the city, will be inaugurated by Chief Minister B.S. Yediyurappa on Tuesday evening.

The three-storeyed structure, built in Indo-Saracenic style of architecture on the lines of other heritage structures in Mysuru, is located in front of the Band House, which is currently serving as the office of the Police Commissioner.

The CM will inaugurate the new office at 5 p.m. in the presence of Home Minister Basavaraj Bommai and Minister in-charge of Mysuru district S.T. Somashekar while former Minister and MLA representing Krishnaraja Assembly constituency S.A. Ramdas will preside over the inaugural programme.

Mr. Yediyurappa will also inaugurate 108 residential quarters for police personnel under the Police Gruha 2020 project. The construction of 36 houses in Jyothi Nagar and 72 houses in Jockey Quarters, totalling 108, had been taken up at a cost of ₹20.31 crore in March 2018 and completed in August 2020.

Though former CM Siddaramaiah was scheduled to inaugurate the new office in March 2018 before the last Assembly elections, the inaugural programme was cancelled.

A group of citizens had contended that they had moved the court against the construction of the office on a plot of land earmarked as a park. However, the Police Commissioner’s office, in a statement on November 23, had clarified that the Mysuru City Corporation (MCC) had issued a completion certificate for the building on September 5, 2020.

The new building will house the foreigners’ registration Office, a passport and police verification section, a computer and photography section, a records room and a canteen on the lower ground floor, while the reception and a well-equipped conference hall will be on the upper ground floor.

The offices of the Police Commissioner, Deputy Commissioner of Police, besides the wireless section, traffic automation centre, CCTV Centre and fingerprints’ section will be on the upper ground and first floor of the building.